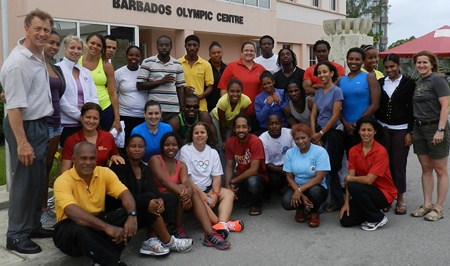 Lausanne (SUI), July 10, 2012: During the first week of July, Barbados hosted a Level 1 Academy for Men’s and Women’s Artistic Gymnastics for the first time as did the Dominican Republic exactly one month earlier. It was held in the capitol city of Bridgetown and became the 47th country to host a FIG Academy and the 15th federation of the Americas to do so. It was the 129th academy in the 10-year old FIG Academy programme.

Thirty coaches attended from four Caribbean countries – Barbados, Bermuda, Puerto Rico and Trinidad. We were disappointed that Jamaica and Bahamas did again not take the opportunity to participate in an academy event especially since the attendance of the participating coaches was partially funded by the FIG Development Fund for the Pan-American Gymnastics Union. Bermuda attended for the first time and becomes the 111th FIG member federation to participate in the academy programme.

Professor Keith Russell of Canada and President of the FIG Scientific Commission served as course leader and taught all of the theory lectures. The men’s events were taught by José Súcart of Puerto Rico and the women’s apparatus was taught by Josée Cyr of Canada. Rhony Ferreira of Brazil taught artistic preparation and choreography.

As expected, there was a wide range of results in the two-part examination process and this reflected the wide range of experience and knowledge of the participants. The highest results for WAG and for the academy overall were achieved by Amanda Baughman of Bermuda with a 97% score overall and an exceedingly rare 100% on the practical examination. The highest result for MAG was achieved by Darius Fields of Barbados and his excellent 93% score was matched by Yazira Cabrera Davila of Puerto Rico

We thank the Barbados Gymnastics Federation for its eagerness to bring an academy to its country. Thanks to Darius Fields who not only excelled in the course but as Secretary was responsible for all of the lead up planning. Charmaine St. John worked tirelessly to assure that all aspects of the course were successful and that all needs of experts and participants were efficiently met.