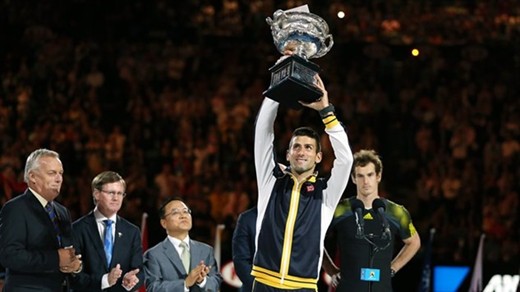 Melbourne – Australia, Jan 27, 2013: Novak Djokovic has done what no man in the Open Era has ever been able to accomplish – he has won three Australian Open titles in a row with a pulsating victory over Andy Murray in Sunday night’s men’s singles final at Melbourne Park.

The Serbian looked to be in trouble when he lost the first set tiebreak and faced three break points in the opening game of the second set. However he dug deep and found an extra gear to come back with his customary fighting spirit to win in four sets.

In the end Djokovic proved too good for Great Britain’s Murray and prevailed 67(2) 76(3) 63 62 in three hours and 40 minutes. Some truly awe inspiring rallies left both men showing signs of having endured a physical battle that is symptomatic of their recent encounters.

In the mixed doubles final there was joy for home fans as Jarmila Gajdosova and Matthew Ebden overcame Lucie Hradecka and Frantisek Cermak 63 75.

Victoria Azarenka battled back from a set down to overcome China’s Li Na 46 64 63 in the women’s final on Saturday. It ws the first time since Rafael Nadal and Justine Henin at 2006-07 Roland Garros that the men’s and women’s Grand Slam titles had been successfully defended by both players.

Sara Errani and Roberta Vinci of Italy took the women’s doubles title while Bob and Mike Bryan achieved a major milestone of their own, defeating first-time finalists Robin Haase and Igor Sijsling 63 64 to win a record 13th Grand Slam doubles title. With their sixth Australian Open crown, the duo surpassed John Newcombe and Tony Roche on 12 Grand Slam triumphs to become the most successful doubles team of all time. —- ITF/Photo: Paul Zimmer