World number four LIN Gaoyuan was on fire against 2017 World Championships bronze medalist LEE Sangsu, giving the latter no chance to fight back, ending matters quickly in the first match 11-3, 11-3, 11-2. 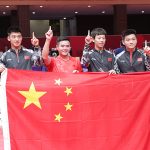 18-year-old WANG Chuqin then faced 23-year-old JANG Woojin in an epic counter that thrilled the sell-out crowd at the Jakarta International Expo.

Recovering from his semifinals loss to Chinese Taipei’s LIN Yun-Ju earlier in the day, WANG Chuqin held on to his nerves to overcome JANG Woojin 13-11, 7-11, 11-9, 11-6 to help China win its record seventh Gold.

Playing in his first Asian Games, WANG Chuqin stated “After the semifinals loss, I was devastated. Luckily my team stood behind me and motivated me, giving me the power to fight in the final, and I was able to give in my everything in the match.”

Though losing to Korea Republic in the semifinals, the Indian men’s team made history in Jakarta, securing their first ever table tennis medal at the Asian Games.

“We are very happy with the victory! I played the third match in the last edition of the Asian Games in Incheon, and today I played first and was able to win the first point for our team, it’s definitely not easy,” stated world number one ZHU Yuling after leading China to Gold.

“I think unity is the key for our team victory today, all five of us are close in age and it’s easier to communicate between us and cooperate with our coach, that was crucial.”

The Chinese Taipei men’s team took home the other Men’s Team Bronze medal, while Hong Kong & Korea Republic settled for the Women’s Team Bronze to round up the Team event.

The 2018 Asian Games table tennis event continues tomorrow, 29 August with the Mixed Doubles action, followed by the Mixed Doubles Final on 30 August, while the Men’s & Women’s Singles competition will begin from 30 August till 1 September. —- ITTF