By Amjad Aziz Malik, Secretary General, AIPS Asia, Jeddah, Sept 24, 2018: AIPS Asia honoured the Chairman of the Board of Directors of the General Authority for Sports of the Kingdom of Saudi Arabia, Turki bin Abdulmohsen al-Sheikh, with a highly coveted award – the Medal of Honor of Asia – as the 21st AIPS Asia Congress came to an end on Sunday.

On his behalf, the Vice President of the Authority for Media and Relations, who also doubles as the President of the Saudi Sports Media Federation, Dr. Rajaallah al-Solami received the award, which was given in acknowledgement of the valuable contribution of Mr. Turki at the continental level towards the promotion of sports journalism.

The 21st AIPS Asia Congress was held in Jeddah Kingdom of Saudia Arabia, from September 21 – 23. 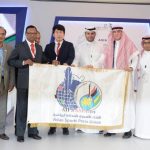 Welcome The Saudi Sports Media Federation hosted the magnificent Congress which welcomed a lot of dignitaries including those that had traveled from countries that are not member nations of the Asian body of AIPS. 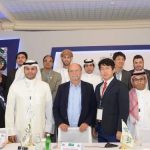 “Being amongst such a distinguished gathering of dignitaries under the banner of AIPS Asia is our pride and we wish it a complete success,” said Dr. Rajallah al-Solami.

He also thanked the Chairman of the Board of Directors of the General Authority for Sports in Saudi Arabia, Turki bin Abdul Mohsen al-Sheikh for his generous support and kind patronage in making the Congress a complete success.

Promotion AIPS Asia President, Sattam Alsehali, in his remarks on the occasion said; “This is a big opportunity for us to decide on the promotion of sports journalism in the continent and we really pleased to have representation of AIPS amongst us today.”

He especially thanked the Saudi Sports Media Federation for creating a new history for their homeland.

According to the AIPS Asia President, the 21st AIPS Asia Congress was just a dream a year ago and “today we are availing it practically.

This really is a historic day for the Saudi Federation of Sports Media, and we congratulate its wise leadership on this glorious occasion, he remarked”.

Sehali added: “We have been rearing tremendous wishes in our minds and hearts to achieve many more achievements of the kind and the presence of seven delegates from various countries of Europe, Africa and America at the conference apart from 28 member nations of the Asia continent, reflects a leap forward in the ongoing efforts to promoting sports journalism.

This achievement also depicts a major initiative in the wake of the Memorandum of Understanding concluded between AIPS ASIA and the Asian Football Confederation some time back.”

While referring to the organization of Young Reporters Training Programmes and the Women Workshops by AIPS ASIA, Satam said, “all these are the things that practically confirm our determination to transform our dreams into reality”.

Landmark achievement the President of AIPS, Gianni Merlo in his speech at the opening ceremony of the Asian Congress stressed the importance of hosting the event in Jeddah and described it as a landmark achievement towards attaining the aim of unity in the continent.

“This moment is a positive turning point in the ongoing efforts towards promotion of sports journalism in the Asia Continent.

I feel particularly delighted to be a part of this meeting in Jeddah,” he said.

Merlo continued; “It is clear that our mission in Asia and throughout the world is meant to overcome difficulties, since it is also part of our professional responsibilities.

The fact that our media professionals are targeted with a wave of fabricated news items, which are aimed at manipulating the facts and, unfortunately, in many cases the respective elements succeed in their purposes.”

Future the Congress through its panel discussions deliberated in detail on the future of sports media.

Ahmed Khoari Issa of Malaysia acted as moderator on one of the panels which had Gianni Merlo from Italy, UK’s David Walker, Dr. Turki al-Owad of Saudi Arabia and Hee Don Jun from South Korea as panellists.

It had Evelyn Watta from Kenya, Hazarica Barthana of India, Heba Sabbagh from Jordan, Hana al-Alouni from Saudi Arabia and Helu Yu of China as panellists.

They focused on the success stories that have achieved by women journalists while overcoming the obstacles that confronted them from time to time in past.

They all agreed that the challenges women sports journalists face are on the decline with the passage of time.

General Assembly After the panel discussions, there was the General Assembly of AIPS Asia which began its proceedings by discussing the reports of the various federations and reviewing many of the themes of the federation.

Young Journalists Young sports journalists were present on the first day of the Congress to share their unique experiences.

Prominent amongst the speakers were Faisal Atta of Saudi Arabia, Mohammed Adnan of Malaysia, Hanif Ullah from Pakistan and Lu Kuan of China Taipei.