Delhi, India, Nov 15, 2018: The flyweight (51kg) boxers were the first one on the ring at the 2018 AIBA Women World Boxing Championships in Delhi on thursday afternoon, showing the path to the 52 athletes competing on day 1 at the expected tenth edition of the competition.

The likes of Canada, Italy, Brazil and USA were among the countries progressing athletes into the next round after a superb day of boxing action in KD Jadhav Indoor Stadium.

THREE ROUNDS FROM DAY ONE

Round 1: Thrilling anticipated final to kick off the World Championships in Delhi

The first bout on Ring B was a glimpse of what could have been a final in the flyweight category (51kg), as Kazakhstan’s Zhaina Shekerbekova met EUBC European Women’s Champion Russia’s Svetlana Soluianova.

The stylish performance of the Kazakh boxer confirmed her medal potential by defeating Russia’s favorite.

Round 2: Switzerland’s hope Sandra Brugger advance to the next round

Brugger hard preparation for the event has paid off today seeing the Swiss hope advancing to the next stage in New Delhi.

The participation of these four newcomers, coming from three different continents (Europe, Asia and Africa), prove the strong efforts made by AIBA in developing the noble art across the World.

Get to know more about Ramla Ali, the first Somalian women boxer to ever participate at the AIBA World Championships

Get to know more about Ramla Ali, the first Somalian women boxer to ever participate at the AIBA World Championships 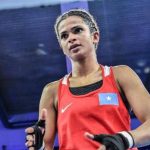 Boxing history has been made today at New Delhi’s KD Jadhav Indoor Stadium when Light (60kg) Ramla Ali stepped in the ring to become the first ever Somalian boxer to compete at the AIBA World Boxing Championships.

Born in Mogadishu, she and her family fled the Somali capital in the early 1990s after her elder brother, 12, was killed by a mortar while playing outside during the civil war.

They ended up in London where Ramla started practicing boxing despite the opposition of her family.

Although her early defeat against Morocco’s Doaa Toujani today, Ramla is not a newcomer in the noble art, when competing in England she went all the way through to become the first Muslim woman to win an English boxing title.

She has now become a role model and an inspiration for lot of young girls trying to follow Ramla’s footprints. —- AIBA