By Tom Lloyd, La Jolla, Sept 27, 2018: The 2018 UR ISA World Surfing Games (WSG), held last week in Tahara, Japan, was a preview of the excitement and inspiration in store for the sport’s historic Olympic debut at Tokyo 2020. 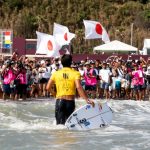 The host nation had a highly successful event on the waves, with Kanoa Igarashi and Shun Murakami claiming silver and copper medals and leading Japan to overall team Gold.

Their performance, and the organisation of the event, is set to inspire Japan’s next generation of surfers and build momentum ahead of the 2020 Games.

More than 200 athletes from 42 countries appeared at the event, with Iran, Hungary and the Philippines making their official first appearances.

Enthusiastic, vocal crowds came out to catch the stars in action, with thousands of local and international fans heading to the shores across the seven-day event.

The event’s live stream and Facebook webcast audience grew considerably from years past, while the Olympic Channel, CBC Canada, Fuel TV and Adrenaline (L’Equipe) TV streamed the Games to new markets and screens around the globe.

With Tokyo 2020 around the corner, the media and organizational success of the 2018 WSG is testament to surfing’s growth across Japan, and the exciting potential of the Olympic Surfing Festival venue plan and the youthful energy surfing can offer the Olympic Movement.

In celebrating the event and its legacy on Japanese and Asian Surfing, Tokyo 2020 Sports Director Koji Murofushi, said:

“We would like to congratulate the ISA, Tahara City and the Local Organising Committee on the success of the UR ISA World Surfing Games that held in Tahara City, Aichi prefecture,” said Murofushi.

“With it being the world’s major surfing competition, our staff have had the opportunity to learn a great many things, which will help us to prepare for and smoothly manage the Tokyo 2020 Games.

With just two years to go, we will continue our preparations for a memorable Tokyo 2020 Games, where surfing is due to make its Olympic debut.”

“What an incredible event – the perfect way to showcase surfing’s Olympic debut in two years’ time.

I want to pass on my congratulations to all the competitors, organisers and colleagues that have been involved in making our time in Japan so special – we cannot wait to return.

“I also want to extend my gratitude to the Nippon Surfing Association and the Tokyo 2020 team who welcomed us so graciously.

It is a pleasure to partner with them, and I am sure that the benefits of our relationship will be on display for all to see in 2020, when the very best of our sport will compete against the iconic backdrop of this incredible country.” —- Photo: ISA / Sean Evans