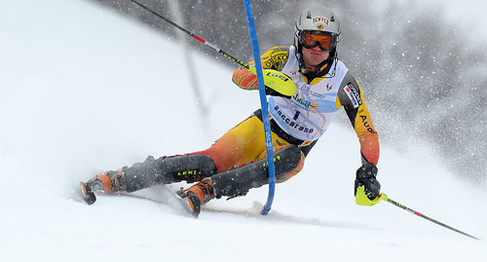 Coming from second position in the first leg, 0.40 seconds behind Mowinckel, Zeller showcased an outstanding second run to nail her first gold medal in an international Championship event.

Lisa-Maria Zeller: “It’s incredible! I don’t know what to say. It’s really a surprise for me because I wasn’t expecting to do a podium here. It was hard because the snow was bumpy but it didn’t stop me!”

Ragnhild Mowinckel: “I am happy! Of course I prefer to be on top of the podium, but I am satisfied with my result. I am participating in all the disciplines so I will do my best to get back on the podium in my last year in the junior category.”

Romane Miradoli: “The GS is my favorite discipline, but I also really like the Super G. I had great results in both disciplines this year, but this is my best performance so far. My goal for the Super G is a podium!”

Massif de Charlevoix, Canada – 18-year-old Magdalena Fjaellstroem from Sweden has clinched the first gold medal at the Alpine Junior Worlds on 21st February. She clearly dominated the Slalom competition ahead of Michelle Gisin from Switzerland (+0.44 seconds) and Adeline Baud from France (+0.54).

For the happy gold medallist, it was another great victory in her young career after winning Super Combined gold in the first edition of the 2012 Winter Youth Olympic Games in Innsbruck (AUT) and stepping into the footprints of skiing legend Anja Paerson who took Slalom gold 13 years ago at the same event in 2000.

Magdalena Fjaellstroem: “Wow, I didn’t know Anja won gold here. We are from the same village and I know her very well. I was very tired in the race and the conditions weren’t great but it feels awesome to have won this medal!”

Dominique Gisin: “It’s unbelievable, these are my first World Championships and I win a medal in the first race. It has been going really well all season but I didn’t expect silver here. The slalom is my only discipline so it’s 100% for me!”

Adeline Baud: “I am very pleased! Slalom isn’t my number one discipline so it’s definitely a huge surprise for me.” —-FIS