By Sports Reporter, Karachi, Jan 25, 2018: (Press Conference) We have invited you for the announcement of the first major scrabble tournament of 2018; the 19th Inter School Scrabble Championship which will be played at BVS Parsi School on February 3-4, 2018. 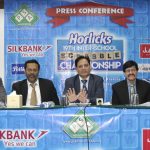 As you are aware the 2017 edition turned out to be the largest scrabble tournament in the world with 1394 players. This year’s event is almost certain to break all previous participation records. It is expected to be the biggest tournament of any single sports in Pakistan with approximately 2000 players

The championship is open to ALL schools and colleges. Entry forms are available at our website www.pakistanscrabble.org. The last date of registration is 29th January

We are proud to remind you that the team Pakistan picked from last year’s inter school championship went on to create history at the Junior World Scrabble Championship played in Nottingham, England by winning five WORLD CHAMPION titles. The reigning champions of under 10, 12, 14, 16 and 18 age category are all from Pakistan.

These players although still in school will not be playing in the upcoming inter school championship but will be a part of the management of the event. This is a great tradition proudly introduced by PSA. The youth players who become international players are elevated to the management and take up important roles.

The largest scrabble tournament in the world will once again be managed by a team of about 50 youth players.

The year 2017 turned out to be a great year for scrabble in Pakistan. Apart from the last year’s inter school and the JWSC mentioned above:

We are hoping that 2018 will bring further glory to Pakistan as our young players are getting regular international exposure with support from the corporate sector.

*Horlicks has been a pillar of support for a number of years
*United States Education Foundation has been a strong ally.
*This year we had strong support from Silk Bank and Jubilee Insurance and we hope that they’ll find this partnership rewarding for their brand and extend their support for future events too.
*Pelikan Stationary is also a new partner and they are providing all the stationery for the event
*Geo Super is the official media partner of this championship and has been giving great coverage to scrabble

Kindly give ample coverage to the inter school championship to ensure players from all over Pakistan get a chance to participate in this educational game.