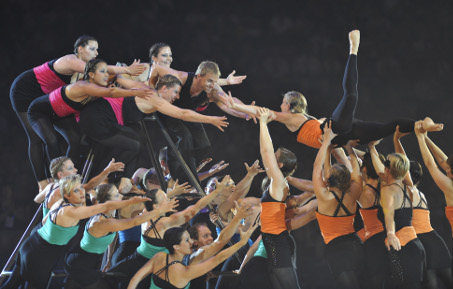 Lausanne (SUI), Sept 13, 2012: The International Gymnastics Federation (FIG) informed on Monday that the bid process for the 16th World Gymnaestrada in 2019 has been launched.

The 131 FIG affiliated and associated national federations have been invited to submit their applications to the FIG Office by December 15, 2012. The host city will be determined at the 13th FIG Council meeting in Liverpool (GBR) in May 2013, where the 2019 World Gymnaestrada Bid Federations will have an opportunity to present their bids to the FIG authorities.

All candidate cities will be visited by a delegation of the FIG Gymnastics for All Committee in January – February 2013 and will be evaluated on venue and other bid content.

The World Gymnaestrada is the largest participation event organised by the FIG. Over the course of one week, there are many different gymnastics performances staged with small or large groups (10-1,500 gymnasts), both indoors and outdoors. The World Gymnaestrada is 7 days in length, with more than 20,000 participants, more than 30,000 total hotel bed nights and approximately 4 hours of “LIVE” television broadcast and 2 x 55’ televised highlight shows distributed to 100 countries.

The World Gymnaestrada is a world-wide, non-competitive FIG Gymnastics for All event held every 4 years and attracting the largest number of active participants of any FIG event. Participation is for everybody, regardless of gender, age, race, religion, culture, ability or social standing.