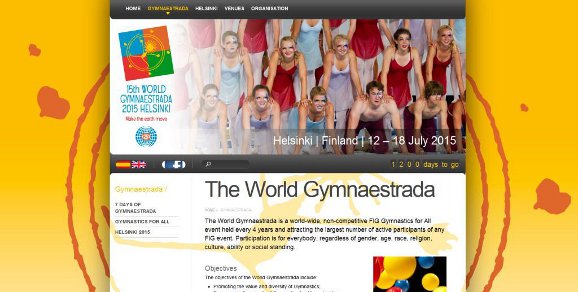 Available in English and Spanish, the website currently provides general information surrounding the event as well as information on the city of Helsinki and Finland as a country.

The President of Finland (2000-2012), Tarja Halonen, has agreed to chair the Support Committee for the World Gymnaestrada 2015. President Halonen has been involved with gymnastics throughout her lifetime, including during her presidency.

“For decades, gymnastics has been a part of my life and the life of my family. As a form of exercise, it has something to offer everyone. The experience, being part of the community, taking care of your health and simply feeling good; these are the things you get more and more from gymnastics. As a form of exercise, gymnastics suits people of all ages and provides enough challenges for everyone,” President Halonen expressed her enthusiasm for gymnastics during the bidding process for World Gymnaestrada 2015.

“World Gymnaestrada events are never forgotten. We Finns are ready to bring together our sports-crazed nation, gather our voluntary forces and know-how to build this event side by side. I believe that as hosts we can imbue the event with our love for exercise,” President Halonen continued.

The Finnish Gymnastics Federation and the WG2015 LOC are very honoured by President Halonen’s commitment to the World Gymnaestrada and the promotion of the event.