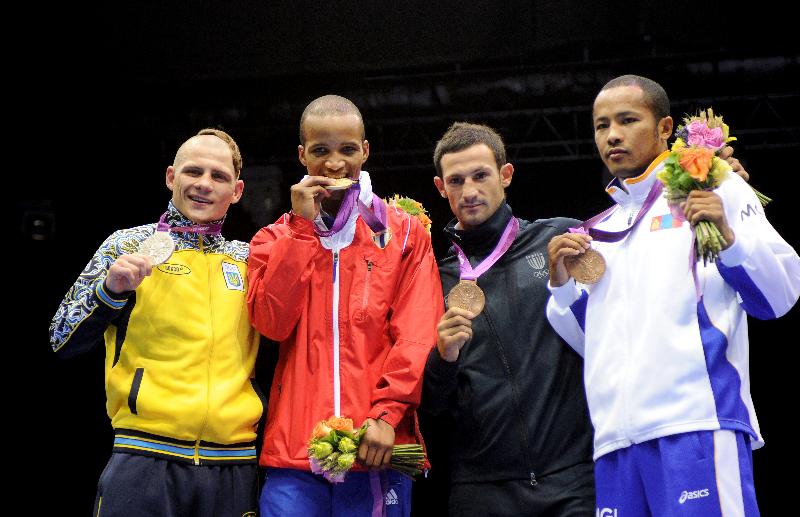 London – Great Britain, August 12, 2012: Campbell, On day fifteen of competition at the London 2012 Olympic Games, four boxers became Olympic Champions for the very first time whilst one made history by defending his title. The atmosphere at the packed ExCeL arena was once again fantastic for five contest of the very highest quality. The Light Flyweight (46-49kg) final saw 32-year-old Thai Kaeo Pongprayoon challenge the reigning Olympic Champion Shiming Zou for the gold medal. The Chinese orthodox began by switching stance, trying to confuse his opponent in the early stages and looking to score with that telescopic jab of his.

The experienced Pongprayoon was not being overawed but Zou’s expert counter-punching made the difference as he took the first by a single point, 2:1. In the second, the Chinese triple AIBA World Champion continued to use his height to repel the attacks of his diminutive opponent and edged the round 4:3. Pongprayoon showed huge endeavour in the final round, throwing some good connecting one-twos but yet again was met by those counters from Zou and the Chinese legend made history with his 13:10 victory, becoming the first ever boxer to defend his Olympic title at Light Flyweight.

The bronze medals went to Ireland’s Paddy Barnes, who had pushed Zou all the way in the semi-finals, and David Ayrapetyan of Russia.

In the Bantamweight (56kg) final, it was the much anticipated showdown between Great Britain’s Luke Campbell and 23-year-old John Joe Nevin, which had the crowd on the edge of their seats right from the off. The British southpaw landed a couple of good jabs and a quality right hook in a quality first round to edge it 5:3. The speed and reach of Campbell was causing Nevin quite some trouble, the Irishman getting caught early by a big left in a frenetic second but he composed himself and threw some sublime shots to take the round 5:4 and reduce his deficit by a point.

The finale was electric with the measured approached of Nevin seeing him hit his target early on, but then Campbell came back with a huge right and the orthodox fighter from Ireland was sent crashing to the canvas and he had to take a standing eight count. The crowd were chanting, “Campbell, Campbell”, in support of the home boxer, and the Brit responded with a sumptuous final round which saw him crowned Olympic Champion after winning the bout 14:11. He held back tears as he was declared the winner.

Campbell said later, “It is a dream come true, it is brilliant. I cannot describe the feeling, but I have got a gold medal and it feels very heavy. I am speechless. All the hard work, missing out on lots of things, it has been well worth it. I am so proud, for my family and Great Britain. The crowd were inspirational, 10,000 people shouting ‘Campbell.’ You cannot describe the feeling. It’s once-in-a-lifetime to be part of the Olympics and represent Great Britain”.

The two were then joined on the podium by Satoshi Shimizu of Japan and Cuba’s Lazaro Alvarez Estrada, who both claimed bronze medals after making it to the semi-finals.

Going head-to-head for the Light Welterweight (64kg) gold medal were the experienced Cuban southpaw Roniel Iglesias Sotolongo and Denys Berinchyk of Ukraine. An action-packed first round saw the two going toe-to-toe in the centre of the ring as the Ukrainian orthodox fighter looked to draw his rival into a slug fest. The 2009 AIBA World Champion from Cuba though demonstrated an exquisite repertoire of shots and did not allow Berinchyk to impose himself, with Iglesias Sotolongo taking the round by a point, 5:4, after connecting with some crisp hooks.

It was fast and furious in the second with Berinhcyk looking to overpower his opponent once more, but the Cuban kept his composure, unloading some sensational shots, including a cute right uppercut as he took the second by a point. It was real clash of styles with Iglesias Sotolongo a classy operator, full of finesse, against a pure brawler. The Cuban’s technique was in a league of its own, proving he could mix it up with anyone as he recorded an impressive 22:15 victory. Iglesias Sotolongo was overjoyed, doing a lap of honour with the Cuban flag, to the acclaim of the crowd. His gold medal was a 33rd for Cuba in boxing.

The Olympic gold medallist declared afterwards, “Today is the most important day of my career. Without my family I could not have achieved this victory. I dedicate it to them”.

For the medal ceremony, Italy’s Vincenzo Mangiacapre and Munkh-Erdene Uranchimeg of Mongolia joined the two finalists to collect their bronze medals.

Esquiva Falcao Florentino of Brazil then faced Japanese southpaw Ryota Murata in the Middleweight (75kg) final, in what was an enthralling battle. Both boxers had skill and power and each exhibited good variations in their punches, with a huge number being thrown from all directions. Murata connected with some hard hooks to take the first 5:3. The Brazilian orthodox fighter was moving well, looking to make that jab count before unloading some good uppercuts but his rival’s big frame and tight defences were extremely difficult to pierce through.

Falcao Florentino’s sheer persistence ensured he reduced his deficit by a point going into the third. The closing stages were riveting as the Brazilian looked to dominate by throwing a whole load of punches, one right in particular rocking Murata but the savvy Japanese came back and scored vital points right at the death to claim the gold medal by winning 14:13.

Great Britain’s Anthony Ogogo and Abbos Atoev of Uzbekistan were the two semi-finalists rewarded with bronze medals for their efforts.

In the last bout of the evening, experienced Italian Clemente Russo faced the dominant force at Heavyweight (91kg), Oleksandr Usyk of Ukraine, to decide who would be proclaimed Olympic Champion. The orthodox 2008 Beijing Olympic Games silver medallist from Italy was looking inspired in the first round, dictating proceeding against his taller opponent, feinting before throwing some good combinations, with his favourite overhead right scoring as he took the round 3:1.

The Ukrainian 24-year-old southpaw came back with a vengeance in the second, looking to make his power and reach make the difference as he threw some thunderous hooks and a huge left to readdress the balance by claiming the round 7:5. The two were now going into the third level. A very tactical final round exploded into life midway through with both fighters throwing everything they had at each other but the poise of Usyk ensured he took the last round, triumphing 14:11 to claim the Olympic Gold medal.

“I feel absolutely great. I showed everyone what I can do, especially considering I was behind in the first round. I want to say thank you to all the spectators”, said Usyk after his victory.

On the podium to collect their bronze medals alongside the finalists were Bulgaria’s Tervel Pulev and Teymur Mammadov of Azerbaijan.

Sunday will mark the end of the London 2012 Olympic Games with five finals bringing this unforgettable show to a close. The Fly (52kg), Light (60kg), Welter (69kg), Light Heavy (81kg) and Super Heavyweight (91+kg) Champions will be decided.  —- AIBA