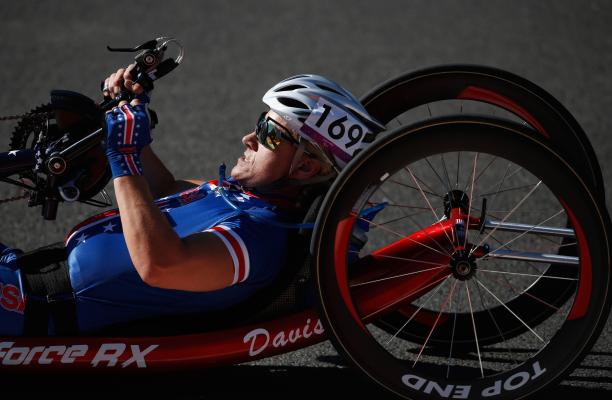 Germany, Oct 15, 2012: USA’s Muffy Davis has been voted the International Paralympic Committee’s (IPC) Female Athlete of the Month for August and September after winning gold in all three of her handcycling events at the London 2012 Paralympic Games. On the Brands Hatch course, Davis claimed titles in the individual time trial H1-2 and individual road race H1-3 events, as well as the mixed team relay H1-4 with American teammates Matthew Updike and Oscar Sanchez.

“I came here for three golds and I got them,” Davis said following her relay win. “This was the one I was most nervous about. You don’t want to let your teammates down.”

Davis garnered 42 per cent of the public’s vote on Paralympic.org to win the honour, beating Australian swimmer Jacqueline Freney, who finished second with 29 per cent of the vote.

The veteran, a former alpine skier, now has seven Paralympic medals to her name, as she previously won a bronze at the Nagano 1998 Paralympic Winter Games and three silvers at the Salt Lake 2002 Games.

The accomplished adventurer and Paralympian Ambassador did not take part in her first international handcycling competition until 2010 at the World Championships, but after winning three silvers there and earning a place on USA’s London 2012 team, the rest was history.

To help compile the shortlists for each category the IPC took nominations from the National Paralympic Committees and International Sport Federations that took part in the London 2012 Games. —- IPC