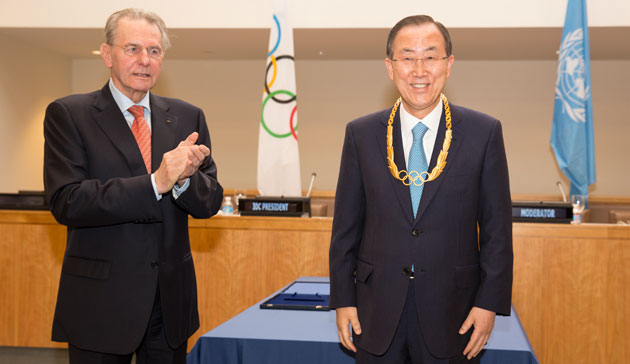 New York – USA, June 05, 2013: The 3rd International Forum on Sport for Peace and Development opened today in New York with the International Olympic Committee (IOC) honouring United Nations (UN) Secretary-General Ban Ki-moon with the Olympic Order. The award was in recognition of the UN Secretary-General’s strong personal commitment to use sport as a tool for social change, a concept brought to life through various joint IOC-UN projects at community level. It was also under Mr Ban that the IOC received UN observer status in 2009.

The UN Secretary-General and IOC President Jacques Rogge delivered keynote speeches at the Forum, held for the first time at the UN headquarters.

President Rogge said: “As we meet here today, sport is at work for peace and development in countries around the world. Collaboration in this area has increased dramatically and involves a wide range of committed partners.” He added: “The relationship between the IOC and the UN goes back many years. Our organisations have two very different roles in society, but we share some core values.”

Read here the full speech of the IOC President:

UN Secretary-General Ban Ki-moon said: “The link between sport, peace and development grows stronger by the year. It can be traced back in history to the original Olympic Truce, which guaranteed safe passage to athletes and other travellers attending the ancient Games. It is found in the bidding requirements for modern Olympic host cities, which are asked to provide a durable social and environmental legacy. And it is evident throughout the United Nations system, which has embraced sport as a valuable vehicle for reaching our peace and development objectives. The International Olympic Committee is a key partner.”

Read here the full speech of the UN Secretary-General:

The two leaders also initiated the start of work on a permanent sports exhibition in the UN building during a ribbon-cutting ceremony. The exhibition will enable visitors from all over the world to better understand the role of sport in human development and the promotion of peace.

By using sport as a tool, the IOC and its partners implement various activities across the globe in fields such as humanitarian assistance, peace-building, education, gender equality, the environment and the fight against HIV/AIDS, thereby contributing to the achievement of the UN Millennium Development Goals.

The 3rd International Forum on Sport for Peace and Development is taking place at the UN headquarters in New York from 5 to 6 June 2013. Jointly organised by the IOC and the UN Office on Sport for Development and Peace (UNOSDP), with the support of the United States Olympic Committee (USOC), the event aims to assess the successes and challenges of past initiatives and looks at how to pave the way for future concerted action in these fields. This year’s theme is “Creating a Common Vision”, and one of the outcomes will be a declaration by all participants that will provide a roadmap in this area for the next two years. —- IOC