By Amelia Fisher-Starzynski, Paris, March 3, 2017: Régie Autonome des Transports Parisiens (RATP Group), Paris’ public transport operator, has today launched a new initiative to encourage physical activity, raise awareness and drive support for Paris’ bid to host the 2024 Olympic and Paralympic Games. RATP, a Paris 2024 bid partner, will invite people travelling on its world-class public transport network to get behind the bid in a project called “All Athletes of the City”. 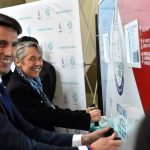 The initiative, which will run from March 3rd to April 7th, aims to build momentum in the city ahead of the IOC Evaluation Commission visit in May by mobilising the 12 million passengers who use the RATP network daily. It will also have five metro and train stations dressed in Paris 2024 colours in March. 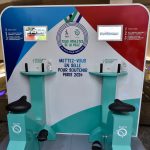 Paris 2024 Co-Chair Tony Estanguet joined RATP President and CEO Elisabeth Borne, Pierre-Yves Bournazel, in charge of the Olympic and Paralympic project for the Ile-de-France region, and Pierre Rabadan, Sport adviser to Mayor Hidalgo, to launch the project at Saint-Lazare station in central Paris. As part of the campaign, stationary bicycles will be set up in stations across Paris and the Ile-de-France region so passengers can get active and start pedalling and accumulating kilometres to show their commitment to bringing the 2024 Olympic and Paralympic Games to Paris. 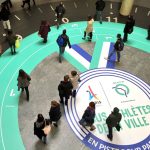 “The RATP Group and its 60,000 employees are proudly committed to Paris 2024. RATP brings its expertise in the field of sustainable urban mobility to Paris 2024, helping to connect athletes and visitors to the city to Paris’ iconic venues and locations via our world-class transport network. A key pledge of the Paris 2024 Olympic and Paralympic bid is that in 2024 every single spectator journey will be made by public transport and we are working closely with Paris 2024 to achieve this goal.”

In February, RATP started testing its first 100% electric, driverless buses on the streets of Paris, a world first in terms of public transport. The innovative buses, which will be made available to fans, athletes and the Olympic family in 2024 will initially run along the banks of the River Seine.

“Paris 2024 wants to promote the practice of sports, to put people on the move. As we get closer to the IOC Evaluation visit we encourage all people using the RATP network to join in ‘All Athletes of the City’ and get behind the campaign to bring the 2024 Olympic and Paralympic Games to France. Paris has one of the best public transport systems in the world, allowing ease of movement around the city and the Ile-de-France region for millions of locals and visitors every day With a metro station no more than 400 meters from any location in Paris, a fleet of clean buses and other green transport solutions in the planning, our partnership with RATP underpins our ambition to host the greenest Games ever in the heart of our iconic capital city.”

About RATP Group
The RATP Group has extensive experience in providing tailor-made transport services at large-scale sporting events including the 1998 FIFA World Cup, 2003 World Athletics Championships, 2007 Women’s World Handball Championships and EURO 2016 as well as sharing its expert technical knowledge and providing solutions for major international events such as the Athens 2004 Olympic Games, the 2010 FIFA World Cup in South Africa and the Rio 2016 Olympic Games.