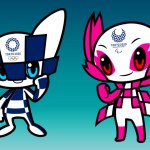 Design Set A secured the largest number of classroom votes and will accordingly serve as the official mascots of the Olympic and Paralympic Games Tokyo 2020.

The results were announced in front of around 600 children at Hoyonomori Gakuen School in Tokyo, one of the schools which participated in the voting process.

The ceremony was live-streamed in order to allow children all over the country to share the moment and discover the winner in real time. Public viewings were also organised in several schools.

In December 2017, Tokyo 2020 published a shortlist of three mascot design sets, each containing an Olympic and a Paralympic mascot, following a review of 2,042 entries submitted by the public during a nationwide competition.

Elementary school classes across the country and in Japanese schools overseas were then invited to evaluate the shortlisted designs, with each class asked to cast a single vote in favour of one of the sets.

The mascot voting process was part of Tokyo 2020’s nationwide educational programme called “Yoi Don!” (“Get Set”), which brings the Olympic and Paralympic Games into schools across Japan and allows students to actively participate in educational initiatives linked to the Games.

By encouraging discussion of the mascots in classes, the voting process helped children learn about the values of the Olympic and Paralympic Movements.

I cannot wait to see these two characters coming to life in the stadiums, on the streets and on TV.

The children selected two mascots that embody both ancient tradition and new innovation. I believe this is an excellent choice since Tokyo 2020’s branding vision is “innovation from harmony”, which implies that innovation will occur when the old and the new of Tokyo and Japan come together.”

Born in 1974, Taniguchi lives in Fukuoka, in southern Japan. He graduated as an art major from Cabrillo College in California, in the United States, and is currently active as a character designer/illustrator.

His work has been featured by companies and at exhibitions in Japan. Taniguchi and the two runners-up – Kana Yano (Design Set B) and Sanae Akimoto (Design Set C) – attended the ceremony, with each receiving an award.

The winning mascots will additionally be introduced on a new educational website launched today by Tokyo 2020 targeting children, students and teaching staff at schools across Japan.

The website is designed to introduce the programme to them and to encourage their participation during lessons and outside of school.

It will feature interactive activities for children, including free online English lessons and news about the Tokyo 2020 Games, as well as Olympic and Paralympic educational materials for teachers.

The overall aim will be to get schoolchildren involved with and feeling part of the Games, learning more about the Olympic and Paralympic Movements, and participating more in sport.

Tokyo 2020’s educational website: https://education.tokyo2020.org/ Currently Japanese language only – an English language version of the site will be launched in March.

The programme is open to all schools in Japan; they can download application forms via the above website. —- tokyo2020