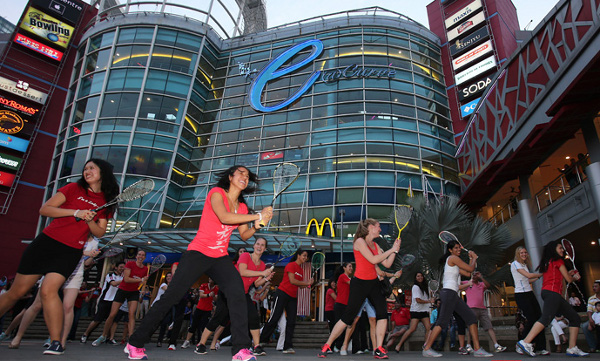 London – GBR, Sept 11, 2012: The world’s top squash players turned out in force at the Curve Shopping Mall in Selangor, Malaysia, to stage a flashmob to draw attention to the sport’s bid to be added to the Olympic Games programme in 2020.

Inspired by world number one Nicol David, and led by the record six-time world champion from Malaysia, the event featured more than 200 players and fans dancing to Nicki Minaj’s ‘Starships’ and Beyonce’s ‘Run The World’.

“I had the idea of creating more awareness for squash and, with my friends back in Penang, we decided that it would be great to do a flashmob and we basically decided to go ahead with it,” said the Malaysian squash queen who has topped the world rankings since 2006.

“All the top players, guys and girls, were excited to do this and come together to show that we deserve to be in the Olympics.

“Watching the London Olympics this year was really heart-breaking,” added 29-year-old David. “I watched it every single day and not being there just didn’t seem right.”

“It went really well,” said David afterwards. “It was a good turnout and I’ve been getting really good feedback from everyone. I think all the players had a really good time!”

Squash’s ‘Back The Bid’ event has sparked significant media attention in Malaysia – and coincides with the CIMB Malaysian Open which has attracted the world’s leading women and men to the Malaysian capital.

WSF CEO Andrew Shelley was delighted to hear of the flashmob initiative: “Squash is lucky to have such a pro-active group of elite athletes who will do almost anything to convince the IOC decision-makers that the sport would be a really positive addition to the Games programme.

“And for them it would mean everything to be part of it.” —- WSF/Picture Courtesy: Glenn Guan of The Star