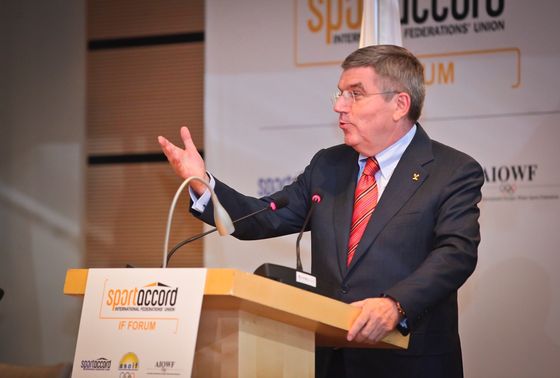 Lausanne, Nov 5, 2013: Association of National Olympic Committees (ANOC) and SportAccord (union for Olympic and non-Olympic international sports federations and organisers of international sporting events) signed a partnership agreement today. The signing took place directly after the Welcome Ceremony of the IF Forum 2013 in Lausanne, Switzerland.

This partnership aims at connecting International Sports Federations and National Olympic Committees, also in partnership with the Internatioanl Olympic Committee (IOC), in order to develop a global sports movement which respects the Olympic Charter and the ideals of International Sports Federations. SportAccord and ANOC will closely collaborate and coordinate actions to benefit sport and society.

“The partnership between ANOC and SportAccord creates a strong alliance between the two organisations and will result in mutual benefits. The goal for us is to positively influence and support people around the world who are passionate and engaged in sport,” SportAccord President Marius Vizer said.

At the same time, they maintain their autonomy, integrity and benefits in terms of reciprocity and sharing the advantages, including the financial benefits, between the principle actors, the athletes, the coaches, National Federations, Continental Unions, NOCs and the IFs. We need to confirm the IFs contribution by the IOC Membership for all Olympic IF Presidents, revision of the Rio 2016 Sport Programme (taking into account the applications for IF proposed disciplines by the 19 International Federations), inclusion of additional sports in the Olympic Programme and the recognition of unaffiliated IFs.”

ANOC President H.H. Sheikh Ahmad Al-Fahad AL-SABAH commented on the partnership, “this partnership is to the benefit of the entire Olympic Movement. It will increase the cooperation between the National Olympic Committees and International Sport Federations and as a result, will benefit all athletes inside and outside the Olympic Games Programme.

This cooperation is in close partnership with the IOC and respects the principles of the Olympic Movement and the Olympic Charter. I thank SportAccord and its President Marius Vizer for the collaboration in establishing a partnership agreement with ANOC which is in respect of all IF’s and the IOC.”

IOC President Thomas Bach said at the Welcome Ceremony of the IF Forum 2013 and prior to the signing, “Our meeting yesterday was an important moment in the development of sport. I congratulate Marius Vizer for his brilliant election as SportAccord President. There is now a window of opportunity and we have an open dialogue to face many challenges that are on the horizon. I wish you all a good, trustful collaboration in Lausanne.” —- Sportaccord