By Robert Fawdon, Marseille, France: Sept 13, 2016: With one year to go until the International Olympic Committee (IOC) decides which city will host the 2024 Olympic and Paralympic Games, Paris 2024 has today launched a ‘Tour of France’ – an initiative that will see bid leaders touring cities in France outside of the Paris region to promote the unique vision of the bid and to build on the strong public support. 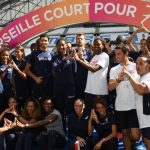 Symbolically, the first tour stop is in the Mediterranean port city of Marseille – the European Capital of Sport for 2017 – which will host Olympic sailing along its stunning coastline and football at the newly renovated Stade Velodrome at the 2024 Games. The tour will continue in Nantes on 16-17 September 2016 and will visit six other cities across France before February 2017. 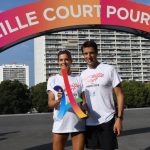 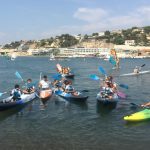 In each city, the bid delegation will consult and engage with representatives from all areas of society including school children, economic and political leaders, young professionals and members of civil society, to gather feedback and ideas and build on support for the bid.

In Marseille, Tony Estanguet along with athletes and school children will also lead a 2024m fun run that will start at the Corniche – the city’s the picturesque seaside roadway – travelling past the 2024 Sailing venue to Borely Park, before finishing at the Stade Velodrome.

“We are delighted to mark one year to go to Lima and begin our Tour of France here in Marseille – a fantastic sports city which will play a big role in a Paris 2024 Games. We are proposing a bid for all of France and nationwide support is very important to us – we are looking forward harnessing this opportunity to visit many regions in France to promote the unique vision of the bid, engage with the public and build on the strong support. This is the beginning of an exciting new phase for the bid.

“I would like to thank the Mayor of Marseille, Jean-Claude Gaudin, for hosting us to today and it is wonderful to see so many people in this city, especially children and athletes, supporting our bid. Hosting Olympic events in Marseille is fantastic opportunity for us to showcase another part of France and I know this will add a very special element to what will be a wonderful festival of sport and Olympism in 2024.”

“It is great to be here in Marseille with the Paris 2024 bid, the citizens of this amazing city and my fellow athletes. The Paris 2024 project has been driven by athletes from the very start and that is reflected in the bid’s vision and the stunning venue plan. It is fantastic to see athletes fully engaged in the process in decision making roles and the amazing support from the athlete community across the country.

“Marseille is a wonderful sailing venue with optimal conditions for world class, Olympic competition. The spectacular scenery will serve as a magnificent backdrop for TV audiences and fans here at the venue. I have no doubt that sailing in Marseille would be one of the big success stories of the Paris 2024 Games.”