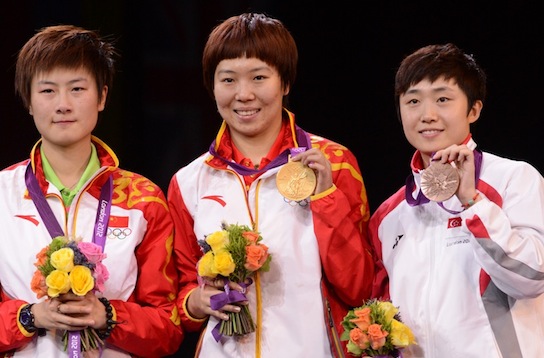 Li Xiaoxia: “I’m very excited. This has been my dream since being a little girl; I dreamed of being an Olympic champion. We (her and DING) are the same level but today I performed better than I expected. My family are in China. I want to thank my parents. They have sacrificed a lot to make my dreams come true.”

Feng Tianwei (SIN): “It means a lot to me because I wasn’t in good condition coming into the tournament. I really wanted to get a medal but I wasn’t confident. Today I showed myself I could do it. I need to believe in myself more.” “I didn’t know much about the Olympic Games. But I remember seeing DENG Yaping (CHN, Barcelona 1992 Olympic gold medallist) on the podium. And that made me want to win a medal.”

The top two seeds in the men’s singles advanced to the semifinal in the morning session at ExCel on Wednesday. ZHANG Jike and WANG Hao cruised though their quarterfinal matches. Despite losing the second game, world No.1 ZHANG quickly overcame JIANG Tianyi (HKG) 4-1, with his speed and power fully evident.

ZHANG will meet Dimitrij OVTCHAROV (GER)in his semifinal on Thursday.

No.2 seed WANG Hao beat Seiya KISHIKAWA (JPN) 4-0 in a one-sided match. The Japanese player looked unsettled and lethargic and WANG dispatched him from the court after just 27 minutes, allowing him only 17 points.

WANG Hao (CHN): “I feel very good and every player’s level is very good so I think I played well today. I prepared for a hard game but it seemed all right and I played well, I thought I take it one by one, step by step, and the top four are all very good so it will be close tomorrow. We’ll just see what happens. I think it will be a simple and spectacular match but I have confidence. I still have a few problems getting into the games. Everyone is about the same. They’re all in the semifinal so they’re all strong.”

ZHANG Jike (CHN): “I played better today. Yesterday I was too stressed. My coach clippped my ear, pulled me aside and told me to relax. He said I was playing too carefully. I think the tournament starts properly for me tomorrow.” —- ITTF