London – GBR, July 31, 2012: Throughout his amazing Olympic adventure, Michael Phelps (USA) had accumulated two important records: the most gold medals (14) and the most gold medals in a single edition of the Games (8). One last record was missing to definitively put his name in the highest march of the Olympic Pantheon: the highest number of Olympic medals. Arriving to London, he had 16 (14 gold and two bronze), but an extraordinary trajectory from a gymnast from former Soviet Union, Larisa Latynina was registered in the record books. Between 1956 and 1964, she has accumulated 18 medals, a number considered impossible to beat until the appearance of a phenomenon named Phelps.

In the fourth session of the swimming programme at the 2012 Olympic Games in London, the US swimmer from Baltimore added two more awards (silver in the 200m butterfly and gold in the 4x200m free relay) to his impressive roll of honour, collecting his medal number 18 and 19 (after his silver on the 4x100m free relay already in the British capital). He is now, considering any parameter of analysis, the best athlete ever in Olympic history, totalling 15 gold, 2 silver and 2 bronze medals! 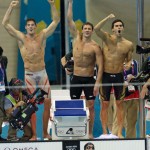 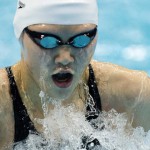 However, Phelps tally has many highs and lows. If in Beijing, it was all highs (despite a 0.01 win in the 100m butterfly and a 0.08 triumph in the 4x100m free relay), here in London, the road has been harder. And the final of the men’s 200m butterfly, where he got his 18th medal was especially breath-taking. Leading all the way through and until the last stroke, Phelps did what Milorad Cavic (SRB) had done at the “Water Cube” four years ago: he glided too much, applied low strength in the touch pad and was beaten “in extremis” by a more dynamic Chad Le Clos (RSA). The difference of 0.05 (1:52.96 for the South African against Phelps’ 1:53.01) tells how much Phelps did not care about the last detail of his race. Still in the water, the best swimmer in history had realised the magnitude of his mistake, which cost the possibility of an unprecedented series of three Olympic gold medals in the same event.

Le Clos (20 years old), on the other hand, was ecstatic and could not believe in what his eyes were seeing in the scoreboard: a “1” in front of his name – Phelps had used this image when he won the 100m fly in Beijing. South African’s best result until this gold medal in London had been fifth places in the final of the 400m IM at these Games and also a fifth position at the 2011 FINA World Championships in the 200m butterfly. Le Clos collects the second gold medal for South Africa in these Games, after the success of Cameron van der Burgh in the men’s 100m breaststroke. The bronze went to Takeshi Matsuda (JPN), who repeated his result from 2008, when he stayed behind Phelps and Laszlo Cseh (HUN).

“To be honest I did not really think I was going to win the race, just to be in the final for me was a great honour. I’m very proud to have achieved what I have achieved,” declared Le Clos. “The race for me was more than an Olympic final. Ever since the 2004 Olympics, watching Michael Phelps winning six medals in Athens, he has always been an inspiration to me and a role model so to be next to him in the final was an honour in itself and in that last 25m when it actually happened (that I beat him), I could not believe it, I guess now I can watch my own race,” he continued, laughing. On Michael Phelps’ achievements: “Hopefully one day I can do this and be for younger kids what he was for me.”

When asked to compare his race to the one in which Phelps had beaten Cavic in Beijing, the South African replied: “To be honest. I think I was really lucky at the finish, I had a perfect touch, I could not have hoped for a better finish.” Finally, on the importance of this medal (and the one of Cameron van der Burgh) for his country, Le Clos concluded: “It is the start of something great hopefully, we have a fantastic group of swimmers at this year’s Olympics and for 2016 it’s looking very positive, I think the main thing is that we had the country behind us this time. When Cameron won his 100 breaststroke, it really motivated me.”

The second medal of Phelps in this fourth session – his 19th at Olympic level, the one establishing a new record – was somehow easier, because not depending entirely on him. Closing the quartet of the 4x200m free relay, his predecessors in the race had already made a good job. Ryan Lochte, the first one, arrived largely in front, clocking 1:45.15, and was followed by equally successful legs by Conor Dwyer and Ricky Berens. Phelps comfortably closed the race, contributing to the final time of 6:59.70. France got the silver medal in 7:02.77, while the last place in the podium went to China (7:06.30). Within these teams, Lochte (USA), Yannick Agnel (FRA) and Sun Yang (CHN) earned their third medal in English soil. Germany and Australia couldn’t reach the podium, finishing fourth and fifth respectively.

“Obviously I would have liked to have a better outcome in the 200 fly,” admitted Phelps. “Chad was there, in the right place at the right time, he got his hand on the wall first, I got to know him over the last year and he is a very good competitor. I had to put this race behind and get ready for the relay, I told the guys I wanted a big lead, the biggest lead as possible, and at 25m to go I started to smile and it was a cool feeling.”

On the 19 Olympic medal tally and gold medal in relay, he continued: “It does show that hard work pays off, to get where I am today. We’ve been able to put our mind to something, go out for it and be able to be first. It is very special for me, I have a lot of emotions that are going through my head right now and they are still other races to come.”

On a more philosophical note: “The biggest thing I have always said is ‘anything is possible’. I have put my mind on doing something that nobody has ever done before and there was nothing that was going to stand in my way. This has been an amazing ride, before I got up on the podium tonight, I tried to hold myself together as much as I could, it was emotional, a pretty good feeling.”

Ryan Lochte also left his comments on the relay race: “For the past two days, I wasn’t myself. I think after that relay my confidence had gone, and Greg (Troy) just kept on telling me ‘you know what? You’re better than that’. I woke up this morning and I was back to myself. So I think that’s what really helped me throughout the whole day and definitely tonight. Now I can see that energy.”

In the remaining two finals of the day, world record holder and defending Olympic champion Federica Pellegrini (ITA), could not reach the level of her previous participation at the Games, finishing in a poor fifth place, in a time of 1:56.73 (her WR being 1:52.98, established at the FINA World Championships 2009 in Rome, where she also won this event). Pellegrini never looked capable of fighting for the leading places, where a very fast Allison Schmitt (USA) dictated the pace for the gold medal.

Touching home in a new Olympic record of 1:53.61 (the previous best mark at the Games had been established precisely by Pellegrini in 2008, with 1:54.82), Schmitt obtained her third medal in London, after a silver in the 400m free and a bronze in the 4x100m free relay. The silver went to another medallist at these Games, Camille Muffat (FRA), first in the 400m free. The French champion finished in 1:55.58 and was followed by Australia’s Bronte Barratt (gold in 2008 in the 4x200m free relay). US Missy Franklin (gold in the 100m backstroke and bronze in the 4x100m free relay) lost the opportunity of earning her third medal in these Games by just 0.01, arriving fourth in 1:55.82.

On her race, Muffat admitted: “I have no regrets, Schmitt was really ahead; she positioned herself well to gain this victory. Of course, this second medal does not have the same taste but I’m very happy with it. Coming into this race, I was very relaxed, not like the 400m free at all, I was totally uninhibited, I knew I did not have all the cards in hand anymore and I left a lot of feathers following the 400m, I tried to take advantage of the euphoria from the 400m to do something not too bad afterwards.”

In the women’s 200m IM, the winner and new WR holder of the 400m IM, China’s Shiwen Ye confirmed her excellent shape in London, getting a second gold in a time of 2:07.57, a new Olympic record (bettering her own mark set in London – 2:08.39). The 16-year-old applied once more her lethal freestyle leg to advance her main challengers and touch for the gold. Alicia Coutts (AUS), already with two medals in London, gets a silver (2:08.15), while the bronze goes to US Caitlin Leverenz (2:08.95). Like Pellegrini, the reigning Olympic champion from 2008 Stephanie Rice (AUS), is once more out of the podium, touching in fourth (2:09.55). Rice had been sixth in the final of the 400m IM, where she had also won four ago in the “Water Cube”.

In the three semi-finals of the session, James Magnussen (AUS) will race in lane 4 in the final of the men’s 100m free, after clocking the fastest performance of the semis, in 47.63. Cesar Cielo (BRA, 5th) and Yannick Agnel (FRA, 7th) are still in the decisive race, while the surprise came from Cuba’s Hanser Garcia, the third fastest in 48.04. In the women’s 200m butterfly, Kathleen Hersey (USA) touched first in 2:05.90, while Michael Jamieson (GBR) gave additional joy to his fans by qualifying with the fastest time in the men’s 200m breaststroke (2:08.20). —- FINA/Photo © Giorgio Scala