Home  »  OLYMPIC   »   Phelps at his best continues to amaze the world!

London – GBR, August 03, 2012: If more records were needed to earn the title of “Best Olympian in the history of the Games”, Michael Phelps (USA) established one more in the sixth day of the swimming finals at the 2012 Games in London. In the duel of the day, the men’s 200m IM, Phelps was trying to be the first male swimmer to successfully achieve three consecutive Olympic victories in the same individual event: after his successes in 2004 and 2008, he got once more the gold in 1:54.27, accumulating his 20th medal in the Games (including 16 golds)! Only one other athlete had managed to win three individual consecutive titles at Olympic level: Australia’s Dawn Fraser (in the Aquatics Centre to witness Phelps’ performance), in the women’s 100m free, between 1956 and 1964. Phelps was always in control of the race and looked in a fresher condition than Lochte, probably still a bit tired from his effort in the 200m backstroke. Accessorily, Phelps became the first male swimmer of the 2012 Olympics to retain his 2008 title in individual events.

On his rivalry with Lochte, Phelps admitted: “Ryan and I have had a lot of good races. Over the last four years, Ryan has made a lot of improvement, in and out of the pool. For me, it’s going to be fun to be able to watch what these guys do over the next four years, where they continue to take the sport. We have had a fun career with one another, we do push each other. He has brought the best out of me many times.” Commenting his own result, the greatest Olympian in history said: “Obviously it’s a relief to win an individual gold, it’s something pretty special. To be able to have the heat that we had all three of us, we shared the podium together and raced each other so many times that it is just cool to finish my career winning the 200 IM gold medal.” When asked about the feelings after his last race in London (Phelps will retire after these Games), he explained: “Once it’s over, it is really going to hit me emotionally, it is really emotional for my mother, she’s watched my sisters go to the sport and retire, and she’s going to watch me retire too. But after Sunday, there will be no more competitive swimming, I will be retired.”

Lochte earned the silver in 1:54.90 (far from his World Record of 1:54.00 set in Shanghai), while Hungary’s Laszlo Cseh got the bronze (repeating his 2011 ranking at the Worlds) in 1:56.22. The Magyar star is used to have Phelps in front of him, having been second to the pool’s legend at three occasions in Beijing (200m butterfly, 200m IM and 400m IM). The silver medallist in the 400m IM, Brazil’s Thiago Pereira seemed throughout the race in a good position to be in the podium, but ended up being fourth.

“Going into every Olympics, I always feel like it’s my time, I always think that I can win every time I go on the blocks. I had some ups and downs at these Olympics but for the most part, I’m pretty satisfied,” admitted Lochte. “I wanted to get all golds in my events but it did not happen. I’m going to have to live with that, move on and learn from it. Try not to make the same mistakes in the next four years for Rio,” he stated. On being the last race with Michael Phelps: “Our rivalry has definitely helped out a lot, he is the toughest racer I ever had to deal with; we have been racing for 8 years now. The rivalry that we created has been tremendous for the sport. Hopefully, he’ll still be around, I’m going to miss racing him.”

Phelps’ compatriot Rebecca Soni (USA) achieved the same feat in the women’s field. And the 25-year-old champion did it with a touch of excellence during the final of the 200m breaststroke, improving the World Record (2:20.00) she had set in the semis of the 200m breaststroke, touching home in the decisive race in 2:19.59. She is the first woman to swim this event under 2:20 (in 50m pool) and culminated a four-year cycle in which she won gold at the “Water Cube” in 2008, the world title in 2011 and now the 2012 Olympic crown.

Until Soni’s and Phelps’ performances, none of the winners in the 16 individual events swum in the first five days of competition had been champion in the same event in Beijing 2008. Many new faces and stars are emerging in the pool, but in the case of Soni she remains a solid asset in the women’s 200m breaststroke. She had, however, a relatively slow start, but recovered quite quickly, touching first at half race. From that moment on, she never abandoned the lead and visibly accelerated in the last 50m – this final effort allowed her to improve her own mark and to set the sixth World Record at these Games. Moreover, this was the fifth medal for Soni at the Olympics, after three successes in Beijing (gold, 200m breaststroke, and silver in the 100m breast and 4x100m medley) and a silver medal (100m breaststroke) already in the British capital.

“The 200 is tricky because I feel like I have to take it out calmly and slowly, so it’s not like the 100 where you just got it from the beginning, it’s all about being fluent and getting through the water smoothly. If I try harder I don’t go as fast. I did not really know I was on WR pace, I just wanted to finish strong, I saw I was ahead and I said, ‘OK, WR last night, gold medal tonight’, and it turned out to be a gold and a WR,” declared Soni after her performance. On being the first swimmer to successfully defend the title from Beijing: “It is a great feeling, I did not know that until after I finished, it means so much because it’s been my goal since I started training again after Beijing, it’s just such an honour to again be able to defend my title.”

In a very fast race, Satomi Suzuki (JPN) earned the silver in a new Asian record of 2:20.72, while Yulia Efimova (RUS) also had to improve the European record to get the bronze (2:20.92). This was the second podium presence for Suzuki in London (after her bronze in the 100m breaststroke), while Efimova gest her first Olympic award (she was silver medallist in this event at the 2011 FINA World Championships).

Shortly after (and before the 200m IM race), Ryan Lochte (USA) also had a privileged opportunity to successfully defend an individual Olympic title in London, but his effort in the 200m backstroke was not so fruitful as Soni. Leader at the 50m, 100m and 150m mark, Lochte was not fast enough to refrain the final acceleration of his compatriot Tyler Clary (gold) and of Japan’s Ryosuke Irie (silver). Clary touched home in a new Olympic record of 1:53.41 (bettering the time set in Beijing by Lochte – 1:53.94), Irie clocked 1:53.78 and Lochte got the bronze in 1:53.94. It was the first Olympic medal for Clary (23 years old) and the second for Irie, third in these Games in the 100m backstroke. Lochte collected his 10th Olympic award, including the three previous podium presences in London (gold in the 400m IM and 4x200m free and silver in the 4x100m free).

“I was prepared for where I was at the 100 mark, I knew I needed to build in that last 25m, catch as much as I can, I was able to put my hand on the wall first, I had a pretty good sense that I was behind those guys at 150m and that it would take something extraordinary to get by them. It is an unreal feeling; I am so happy right now,” considered Clary. “There is always somebody out there that is better, it’s something that always keeps me calling for more, I have been taking second and third places for so long, it’s tough sometimes but it also makes moments like these that much more sweet,” he added. 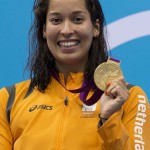 In the last final of the day, Ranomi Kromowidjojo (NED) obtained her first individual Olympic medal, the gold in the 100m free, touching first in a new Olympic record of 53.00 (improving her own time set in the semis, where she had clocked 53.05). The 21-year-old Dutch swimmer had a gold from 2008 (4x100m free relay) and a silver in the same relay here in London. At the 2011 FINA World Championships, she had been third in this event, losing to Aliaksandra Herasimenia (BLR) and Jeanette Ottesen (DEN, the winner in Shanghai). At the Aquatics Centre, the history was different: Herasimenia touched first at the 50m mark, but in the end had to content with the silver (53.38), while Ottesen was second at half way but then downgraded to a modest seventh place (53.75). The bronze went to Yi Tang (CHN), who touched in 53.44 and got her first Olympic award. The two US representatives in the final could not medal, with Missy Franklin finishing fifth and Jessica Hardy in eighth. Confirming the trend in London, Herasimenia’s medal was a first in Olympic history for Belarus!

In the semi-finals of the day, Cesar Cielo (BRA) and Cullen Jones (USA) were the fastest qualifiers for the decisive race in the men’s 50m free (they both clocked 21.54), while Anthony Ervin (USA) was third in 21.62. If Cielo wins the final, he completes a perfect four-year cycle, after his triumph at the 2008 Olympics and at the 2009 and 2011 FINA World Championships. James Magnussen, from Australia, was the surprise among the non-qualified, finishing in 11th. In the women’s 200m backstroke, Elizabeth Beisel (USA) was the best in 2:06.18, followed by Missy Franklin (USA, 2:06.84) and Meagen Nay (AUS, 2:07.42). Finally, after a frantic evening, Michael Phelps still had the strength and the necessary concentration to lead in the semis of the men’s 100m butterfly, finishing first in 50.86. Should he win in London (as he did in Athens 2004 and Beijing 2008), Phelps will add a second event to the list of those having been twice successfully defended by the same male athlete in the history of the Games. —- FINA/Image © Giorgio Scala