By Tom Lloyd, Aarhus, Denmark, Apr 3, 2017: The Paris 2024 Olympic and Paralympic Organizing Committee has today launched a new mobile application – Objectif Paris 2024 – a platform that encourages the French public to get active and, in doing so, support the Paris 2024 bid. 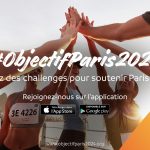 The app, which is now available to download on both iPhone and Android, allows all users to become “Ambassador’s for Paris 2024”. To do so, users must complete fitness challenges, including walking 5km, to then unlock new levels. The bid synchronizes with smartphone’s health tracking systems to monitor user’s fitness levels and rewards active lifestyles.

The challenges, updated monthly and proposed by the founding members of the committee – the athletes, Olympic federations, the French National Olympic and Sports Committee (CNOSF), the French Paralympic Sport Committee (CPSF) and the bid’s partners – feature more than 1,000 different prizes, including brand new sports equipment, sports tickets, and bid merchandise.

The app is designed for all and it is another tool to further engage the youth of France, who have already shown strong support for the bid. Last month, Paris 2024 revealed that 82% of 15-25 year olds support Paris 2024, and the aim of Objectif Paris is to ensure that this large demographic is also inspired to get active.

“Paris 2024 is a passion project bringing together the French people behind the idea that sport must sit at the heart of society. The ‘Objectif Paris 2024’ app is a perfect illustration of this.

“The app mobilizes the French people behind an active lifestyle, and encourages everyone to support our bid and to practice sport on a daily basis. Sporting activity is good for body and mind, and it is for these reasons that we want to use Paris 2024 to better the lives of all French people.”

“Digital and the culture of sharing are at the heart of young people’s lifestyles, and that is why we have placed it at the heart of our bid. The youth of the world is ultra-connected and we want to use this app to reach as many people as possible. Together, we can use technology to create a more active, more connected world. “

“The French are a people of athletes and enthusiasts. There are 17 million athletes in regional clubs around the country. They have made sport a crucial part of their daily lives, and with this platform we can spread this message even further.”