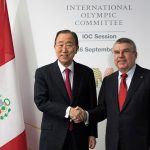 “I believe that ethics is essential to the success of any organisation. That is why I did everything possible to strengthen the culture of ethics at the United Nations. I promoted transparency and accountability in every way I could, and I tried to lead by example,” said Ban Ki-moon, the former United Nations (UN) Secretary-General and newly-elected Chair of the IOC Ethics Commission.

“I am truly humbled to serve the IOC through this role. […] Together let us do even more to harness the immeasurable potential of sport to foster a better world; a world which we all dream of where human rights are fully respected and protected.”

Achieving greater transparency, good governance, responsibility and strengthening ethics are some of the guiding principles of the IOC Ethics Commission under Olympic Agenda 2020, the IOC’s strategic roadmap for the future of the Olympic Movement.

IOC President Thomas Bach said: “Congratulations to Mr Ban on his election as Chair of the IOC Ethics Commission. The IOC is honoured that Ban Ki-moon has accepted this responsibility.

It shows the trust and standing this Commission enjoys within and outside the world of sport. When Ban Ki-moon took office as Secretary-General of the United Nations, he committed the UN to the highest standards of ethics, integrity, accountability and transparency.”

Independent in its functioning, the Commission is charged with defining and updating a framework of ethical principles, including a Code of Ethics, based upon the values and principles enshrined in the Olympic Charter.

In addition, it investigates facts raised in relation to the non-respect of such ethical principles within the framework of the IOC Code of Ethics and, if necessary, proposes measures or sanctions to the IOC Executive Board. Mr Ban replaces outgoing Chair Youssoupha Ndiaye (former President of the Constitutional Court of Senegal).

Ban Ki-moon was the eighth Secretary-General of the United Nations, from January 2007 to December 2016.

One of Ban Ki-moon’s first actions as Secretary General was to introduce a code of ethics to the organisation, which applies to all employees. An Ethics Committee was established to devise “a unified set of standards and policies” for the entire UN system.

Four members were also re-elected or elected to the Commission by the IOC Session for a four-year term: Samuel Schmid, re-elected for a final term (lawyer and former President of the Swiss Confederation); Hanqin Xue, People’s Republic of China, elected for a four-year term (judge at the International Court of Justice); and IOC Members Robin Mitchell and Angela Ruggiero.

Composed of nine members, the Commission includes four IOC Members, of whom one is a representative of the IOC Athletes’ Commission, and five independent personalities, including the Chair.

Previously elected members still on the Commission are: Patricia O’Brien (Ambassador of the Republic of Ireland in France); Geert Corstens (former President of the Supreme Court of The Netherlands); and IOC Members Pierre-Olivier Beckers-Vieujant and Yang Yang, the latter being elected as a representative of the IOC Athletes’ Commission. —- IOC