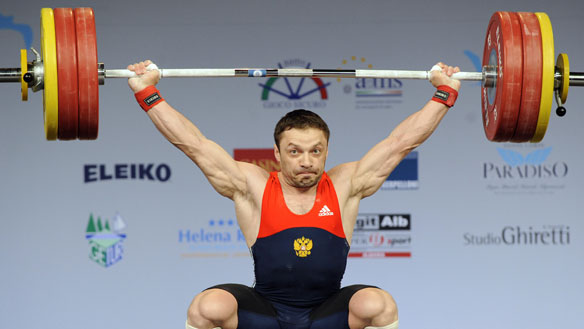 Lausanne – Switzerland, Feb 12, 2013: The Executive Board (EB) of the International Olympic Committee (IOC) today announced that it has disqualified Russian weightlifter Oleg Perepetchenov from the Athens 2004 Olympic Games after further analysis of his stored sample resulted in an adverse analytical finding.

Perepetchenov finished third in the men’s 77kg weightlifting event. The EB has ordered the Russian Olympic Committee to return to the IOC, as soon as possible, the bronze medal and diploma awarded to the athlete.

Upon considering the recommendations of the IOC Disciplinary Commission, composed for this case of Thomas Bach (Chairman), Ser Miang Ng and Gunilla Lindberg, the IOC Executive Board decided:

(i) is found to have committed an anti-doping rule violation pursuant to article 2.1 of the IOC Anti-Doping Rules applicable to the Games of the XXVIII Olympiad in Athens in 2004 (presence of a prohibited substance or its metabolites or markers in an athlete’s bodily specimen),

(ii) is disqualified from the men’s 77 kg weightlifting event where he had placed third at the Athens 2004 Olympic Games, and

(iii) shall have his bronze medal and diploma in the above-mentioned event withdrawn.

II. The International Weightlifting Federation (“IWF”) is requested to modify the results of the above-mentioned event accordingly and to consider any further action within its own competence.

III. The NOC of Russia is ordered to return to the IOC, as soon as possible, the medal and diploma awarded to the athlete in relation to the above-mentioned event.

IV. The NOC of Russia shall ensure full implementation of this decision.

The IOC stores samples for eight years after each edition of the Games so they can be re-tested should more sophisticated detection methods become available or new substances be added to the list of banned substances.

The IOC, in close collaboration with the World Anti-Doping Agency, decided to further analyse a number of samples from the Athens Games as a result of targeted testing based on intelligence and new methods. —- IOC