Lausanne, June 5, 2018: The Debrief of the Olympic and Paralympic Winter Games PyeongChang 2018 was held on 4 and 5 June to assist future Organising Committees, specifically Beijing, and Interested Cities to build upon the “New Horizons” opened by PyeongChang 2018 (Future Host Cities build).

More than 600 participants attended the Debrief, including representatives from the International Paralympic Committee (IPC), National Olympic Committees, International Federations, TOP Partners, broadcasters and athletes, who were all on site to share lessons from PyeongChang, while reinforcing the implementation of Olympic Agenda 2020’s New Norm.

“If there is one message that I would like everyone from the future Organising Committees and interested cities to remember, it is that this new approach has partnership and feasibility at its heart,” said International Olympic Committee (IOC) President Bach. 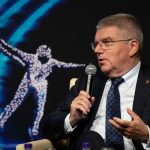 “Our goal is to make the Olympic Games best fit the long-term needs and goals of the host cities. With Olympic Agenda 2020, we have turned the page and are writing a new chapter in the way future Olympic Games are organised.”

Throughout the Debrief, the PyeongChang Organising Committee (POCOG) contributed its expertise on how Olympic Agenda 2020 helped it deliver an iconic sporting event that will offer long-lasting benefits to the region, which include a new express highway, a high-speed railway, sold-out Olympic villages, new hotels and venues that will be used for both sporting and cultural activities.

“PyeongChang underwent an incredible transformation from the time it was awarded the Olympic Winter Games to hosting them,” said the IOC Coordination Commission Chair for PyeongChang 2018, Gunilla Lindberg.

“POCOG set the example of how Olympic Agenda 2020 can be implemented throughout an Organising Committee’s lifecycle. On behalf of the entire Olympic Movement, we congratulate PyeongChang 2018 once again on a job very well done.”

“We are pleased to share the many lessons learned from the recent Olympic and Paralympic Winter Games,” said POCOG President Lee Hee-Beom. “This transfer of knowledge is essential to future organisers, and we are confident that this debriefing will serve as a great learning opportunity for Beijing to host even more successful Games in 2022.”

The first host city to fully benefit from Olympic Agenda 2020, Beijing 2022 has incorporated legacy planning from the earliest stages of preparations. Among the 12 competition and non-competition venues in the Beijing zone, 11 are legacy venues from the Olympic Games Beijing 2008.

These include the iconic “Bird’s Nest” National Stadium, which will be used for the Opening and Closing Ceremonies in 2022.

At the Olympic Winter Games Beijing 2022, a global audience will see this innovative re-use of existing venues from 2008.

The Beijing 2022 Organising Committee’s headquarters is located at a former steel mill that was closed down in 2008 before the Olympic Games, over concerns of air pollution at the time.

This location which will be the venue for the Big Air competitions in 2022, is an impressive example of urban planning and renewal, as it will also include leisure and sports facilities for both public enjoyment and elite training, as well as a winter sports museum.

Further incorporating Olympic Agenda 2020, Beijing 2022 has made it mandatory to include sustainability in all areas of planning the Games, and will use the Games as a catalyst to improve the health of the population, tackle environmental issues and promote sustainable economic growth in the region (Future Host Cities build).

“As demonstrated at the Debrief, the IOC, together with the wider Olympic family, is committed to supporting all future Organising Committees and Interested Cities in their own long-term development objectives.”

“We will attach even more importance to sustainability, legacy, international cooperation and the reduction of costs, so as to deliver excellent Games that make new contributions to the development of the region (Future Host Cities build).

Beijing 2022 will take this meeting as a new starting point, and we will strive to integrate Olympic Agenda 2020 and the New Norm into our preparations.”

To ensure that each Olympic stakeholder experience at the Games is enhanced, strategic sessions at the Debrief included topics such as planning and delivering the Games, engaging and communication with spectators, improving the athletes’ experience, and putting fans at the forefront of the Olympic experience.

For the first time, the IPC was fully integrated into the Debrief, with an eye towards looking at the Olympic and Paralympic Games as a single event, in order to maximise legacy opportunities (Future Host Cities build).

“Over the last two days, it has been important to celebrate PyeongChang’s success while, together with key stakeholders, taking forward key strategic learnings in many areas for future Organising Committees to benefit from,” IPC President Andrew Parsons said.

“In partnership with the IOC and other members of the Olympic and Paralympic families, we want to make each Games edition better, more efficient and more sustainable.” —- IOC