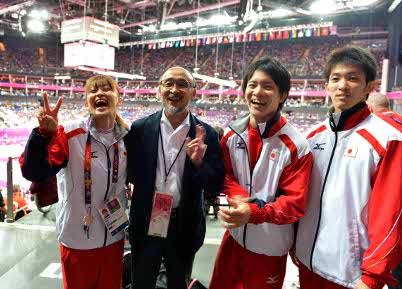 London – GBR, August 11, 2012: Wakayama in eastern Japan is a region famed for its sacred mountains and shrines. It is to one such site, Nichizengu, that the Tanaka family make an annual pilgrimage each New Year and when they visit on 1 January 2013, to pray for blessings, they should also give thanks for those bestowed upon them in the past fortnight.

After all there are not many families who produce a trio of Olympians yet that is precisely what the three Tanaka siblings – brothers Kazuhito and Yusuke and sister Rie – became in London by competing for Japan in the Artistic Gymnastics programme.

It was a first for Japanese gymnastics – following the lead of the three Nakamura brothers, who competed in Japan’s judo team at Atlanta 1996 – and not surprisingly, it is a source of immense pride to their father, Shoji. “Seeing all three of them perform in the Olympics, in this big arena, is such a joy to me,” he said before his return to Japan.

Shoji is a gymnastics coach at the Wakayama Orange Gymnastics Club as well as at Wakayama Kita High School, where he works as a teacher. His wife Seiko was a gymnast herself in her youth and was also in London but flew home earlier. “My wife gets more nervous,” he said.

If the Tanaka siblings grew up in a gymnastics environment, their father insists the credit for their achievements is all theirs. “All three got to such a high level through their own hard work, they are ordinary children but worked so hard, that’s how they got here,” he said.

That said, their father was a strong influence, according to Rie, the 25-year-old who placed 16th in the Individual All-around final and helped Japan’s women reach the Team final. “He didn’t coach me directly but was in the same gym and always had a word of advice,” she said. “It was a great help and I’m very grateful.”

Shoji provided his own explanation. “From the age of six until 15, I helped coach them along with others. They then had coaches in high school and at college,” he said, adding: “Each of my children has individual dreams and came to London to fulfil them.”

In the case of men’s squad members Kazuhito, 27, and Yusuke, 22, they won silver medals in the Team event and raised hopes of further medals when taking the top two places in qualifying for the Parallel Bars final. In the end, though, Kazuhito – sixth in the men’s Individual All-around final – was fourth and Yusuke eighth.

“It’s a shame we didn’t get a medal as we got through qualifying well,” said Yusuke. “We hoped to have two brothers in first and second place again.”

That disappointment diminished in no way their father’s pride but Tanaka Sr did have one remaining wish for his children – to see them all round the dinner table back at home in Wakayama for a family celebration.

“When we go back to Japan, I would like us all to have a meal together,” he said. “It is very hard for us all to meet up in Wakayama.” And no prizes for guessing what the main topic of conversation will be when that dinner does take place. In the words of Yusuke, the youngest Tanaka: “We do speak about general things, but usually end up talking about gymnastics.” —- FIG