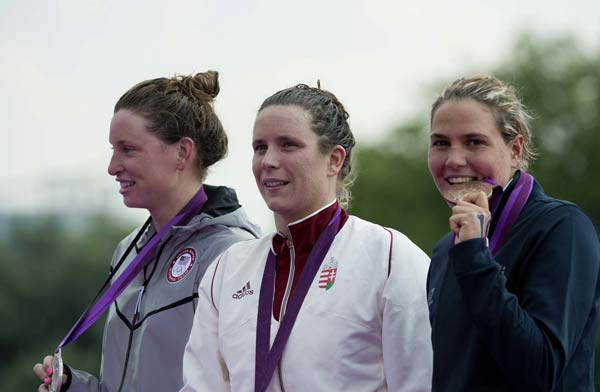 London – GBR, August 09, 2012: Eva Risztov, a veteran of pool swimming at two Olympic Games, an athlete who retired from swimming eight years ago, found that she had the golden touch in The Serpentine in Hyde Park today. The 26 year old Hungarian survived a strong challenge from USA’s Haley Anderson to collect Hungary’s second gold medal in swimming as these Olympic Games. Risztov completed the women’s 10km marathon in 1:57.38.2, just .4 of a second ahead of the American swimmer. This is the second edition of the 10km swim marathon. Larissa Ilchenko (RUS) was the winner of the 2008 Olympic gold medal in Beijing.

Risztov and Anderson swam the Olympic 10km qualifier in Setubal, Portugal in early June where both swimmers gained their entry into the London Olympics. That result was won by Anderson by a margin of 1.4 seconds. The pair beat all of the top ten athletes who automatically qualified from last year’s world championships in this event. The 2011 FINA 10km silver medallist, Italy’s Martina Grimaldi finished 3.6 seconds behind the winner to collect the bronze medal. Grimaldi earned the only swimming medal for Italy in the 2012 Olympic Games.

The 10km marathon was a heartbreak for the 2008 Olympic swimming silver medallist Keri-Anne Payne of Great Britain who was just .4 of a second outside of the medals. Payne was also the world champion in this event from last year in Shanghai. She was the reason that thousands of spectators had turned up in Hyde Park hoping to see her “trade up” the Beijing silver for a shinier medal at the home games.

Risztov’s strategy was to go out in front and try to keep the pace steady but comfortable, yet still holding something in reserve for the final sprint. Another motive for her race leadership might have been the result of her disqualification at the 2011 FINA World Championships. “After the Shanghai race I did not understand exactly why I was disqualified. I decided to keep it a very clean race today. If I led no one could say I did anything. This is the toughest way to win but I decided to follow this tactic because this is the only way to win clearly. That is what I trained for. If I could not win from first place, my mind would have been clear,” Risztov said.

Risztov had plenty of company in the lead pack. For the first 4km of the race, the Hungarian was joined by Payne (GBR), Melissa Gorman (AUS), Angela Maurer (GER) and Anderson (USA). Anderson was determined to stay close to the race leaders seeking her opportunity to settle in comfortably, something that worked so well for her just eight weeks ago when she won the qualifying event in Portugal. Earlier this year she earned a silver medal in a 10km race in Viedma, Argentina.

Risztov was swimming only her seventh 10km marathon, but what she may have lacked in experience was augmented from her speed in the pool. During the first week of the London Games she swam the 100m free as a part of the Hungarian relay team. Individually she swam the 400m free, earning 16th place overall, and she placed 13th in the 800m freestyle events. During today’s race, Risztov would occasionally turn over and swim backstroke to see how close she was being followed and when she entered the feeding zone.

The small pack of athletes found Risztov’s pace challenging and reorganised itself into a single file of swimmers, with someone always swimming close to the Hungarian to maintain contact with the pace leader. Grimaldi, certainly among the most experienced open water swimmers in the field was ever present in the front of the pack. The Italian athlete was thought most likely to start the sprint or to be in the chase if someone else were to break away first.

Going into the sixth lap, Risztov widened the gap to nearly 5 metres between herself and the rest of the pack. It was the 21-year-old Anderson (USA) who made the first move in an effort to overtake Grimaldi (ITA) who may have been swimming just a bit too complacently in the second position. The American reeled in Grimaldi going into the final buoy and was ahead by the time she navigated the buoy.

Anderson (USA), a pool swimmer as well, had set a clean line for the finish and next tried to run down the Hungarian. Anderson’s older sister Alyssa is a member of the USA team in London that earned 30 medals in the pool and was a swimmer in the prelims of the 4 x 200m free relay that earned a gold medal. The younger Anderson swims at the University of Southern California under Dave Salo and Catherine Vogt. Vogt trained her in the pool for the 2009 FINA World Championships in Rome where Anderson swam both the 800m and the 1500m freestyle events. It was that speed the American hoped she could draw upon for today’s final sprint.

Risztov had retired from swimming in 2005. “I stopped swimming because I was not very pleased with the club where I was swimming and I wasn’t happy with my results,” she confided. Risztov was a member of the Hungarian Olympic team at the 2000 Sydney and the 2004 Athens Olympic Games but it was the 2003 Barcelona FINA World Championships where she would enjoy her greatest success as a silver medallist in the 400m free, 200m fly and 400m Individual Medley. Failing to earn Olympic medals, she left the sport. Shortly after watching the 2008 Olympics on television she received a phone call from the manager of the swim club in Debrecen (Hungary) “asking me to begin swimming again” and she did. By 2011 she realised that her strength lie in the distance events and she would compete in the 800m freestyle, the 1500m freestyle and the 10km open water marathon events in the 2011 Shanghai FINA World Championships.

The two pool swimmers, 6 years apart in age would sprint to the finish touchpad oblivious to the cheers of thousands of fans who were also keeping an eye on the battle for bronze. The older and considerably more experienced Risztov touched first and would later admit confidently: “I saw Haley but I had reserves for the finish.” One other event that occurred yesterday certainly may have factored into Risztov’s success. She was absolutely surprised by the sudden appearance of her mother who turned up in the Olympic village to greet her. “It was a big shock, no one knew that the Mayor of Debrecen and his wife had arranged for my mother to travel to London and to come to see my race. It was very emotional to see her. I can’t explain how I felt, but you can imagine how I felt.”

Anderson, the silver medallist shared her race strategy: “I usually start off in the back and work my way up. I was towards the front from the beginning, so it wasn’t rough. There were some elbows to the face but you just kind of roll with it and let it go. I think I was issued a yellow card (a warning) in the first two minutes of the race. I knew that if I was in the front at the beginning then I’d be conserving energy and I put in a good race. It took a lot of energy to catch up to Eva. As soon as I caught her I just wanted to stay with her and give it everything I had, and I did. I’m really happy with the results. There was less energy there at the end. She has a really great race. This is my first really big international 10km so I am really happy with the results and of course I am going to continue doing it.”

The Italian bronze medallist is also the owner a gold medal at the 2010 Open Water World Championships in Roberval (CAN). Grimaldi was third at the 2009 FINA World Championships and second just last year in Shanghai where she took one of the first ten qualification spots. She was the first member of the Italian swim team to win a medal at the 2012 Olympic Games. “Certainly I was hoping for a medal and I prepared for it. I knew it was going to be difficult to hang on (for a medal). I hope to have given them (my teammates) something really emotional, but certainly they also gave 100%. I’d like to dedicate this to my coaches, Fabio Cuzzani (ITA) and to the other coaches and to my friends too. It’s my first Olympic medal and I’m really happy,” said Grimaldi.

Keri-Anne Payne (GBR), the 2008 Olympic silver medallist, offered a candid assessment of her swim in today’s race and paid tribute to those who finished ahead of her. “We are all swimming in such close proximity and it just seemed to be a pretty tough race. I struggled in the pack with all the fighting, I got hit in the face a few times. There were quite a few yellow cards today. It took a lot more energy out of me than I was expecting it to. I’m not really a fighter, I’m more of a lover.”

Payne continued: “I tried absolutely everything I could. It didn’t go quite the way that I was hoping for it to go. I can’t be upset with it, whatever is meant to be is meant to be and I guess I was meant to be fourth today. I wasn’t expecting quite so many people to go out quite so early, and I gave it my absolute best,” she continued. “I think I made an error on the third lap when I went into feed. I had to fight really hard to get back to the positions I wanted to get to, my normal spot in the top two where I like to be I didn’t want to work too hard or I would not have anything left at the end.”

The athlete from Great Britain concluded: “Open water swimming is about who makes the right decisions at the right time. I can’t be upset with the top three girls who won, because it’s not like they didn’t deserve these medals, because every one of them does. Being a world champion or an Olympic medallist doesn’t mean anything going into an open water race. Unfortunately it didn’t quite work for me today, but fourth in the world isn’t too bad.” —- FINA/Image © Giorgio Scala