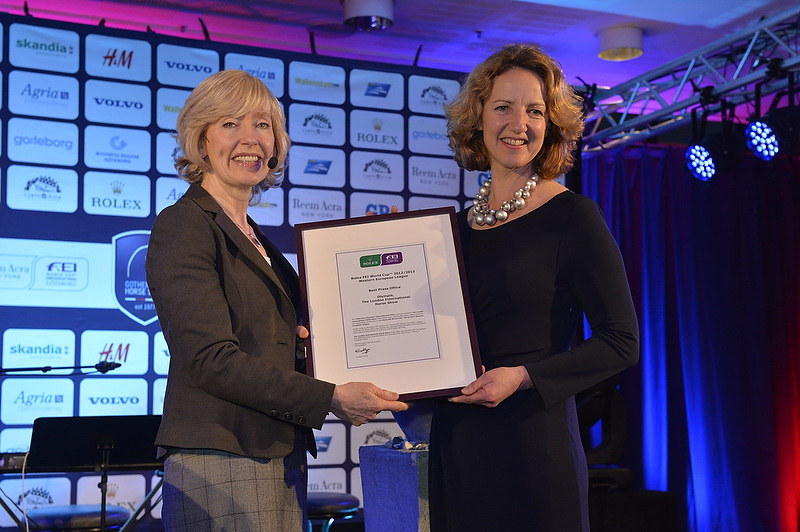 Olympia press officer Jo Peck, event specialist for over 20 years, accepted the award on behalf of the Olympia organising committee and seven-strong press office team at the welcome party for the series Final in Gothenburg (SWE) last night (24 April).

“We are so thrilled to win this award – this is recognition of all the hard work and dedication of the Olympia press team, and the ongoing support we receive from our organising committee,” Jo Peck said. “The Olympia press office is manned by a fantastic team of people, who work closely together to deliver a good working environment for the visiting media.

“Olympia is famous for its stunning Victorian architecture, but this also presents us with some challenges. This year, we made an extra effort to re-organise the collecting ring and give the media a proper working mixed zone, so they could interview riders more easily. This clearly paid off!

“I am so grateful to my team for their experience and knowledge, which means that everything runs as smoothly as possible, and of course to the visiting journalists and photographers who voted for us.”

The Best Press Office award was introduced at the start of the 2010/2011 Rolex FEI World Cup™ Jumping Western European league series to celebrate the work of the press teams and encourage continuous improvement in the services supplied. Journalists and photographers are asked to vote on the press facilities provided for media covering the series on-site and remotely, including online information delivery, press conference management and user-friendly working areas.

“There were four events in the Rolex FEI World Cup Western European league series that got very encouraging feedback on their press teams and the facilities provided for media, but it was Olympia that came out on top and I’d like to congratulate them on this well-deserved win,” FEI Director of Press Relations, Grania Willis said.

“The Olympia organising committee and the press team looked carefully at the facilities they were offering to media, saw where improvements were required and made some key changes. This had an immediate positive impact and obviously has been really appreciated.

“Good press offices are essential to ensuring that media get the services and facilities they need, when they need them, so that our athletes and sponsors get the type of global visibility that is essential to the future growth and development of our sport around the world.” —- Photo: Kit Houghton/FEI