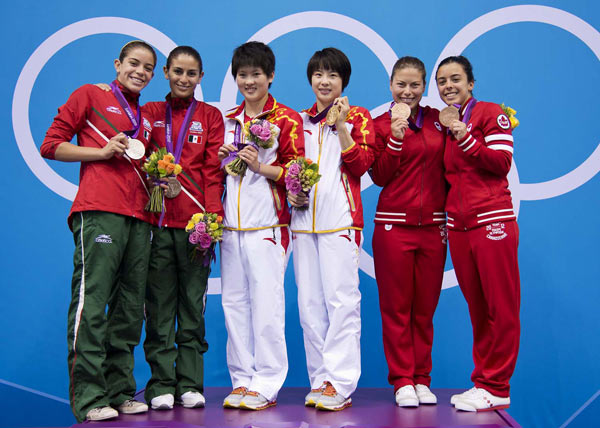 London – GBR, July 31, 2012: Like in the men’s event, Mexico managed to be the best representative of the “rest of the world” against China in the women’s 10m platform synchro, the third event of the Olympic diving programme of London 2012. Ruolin Chen and Hao Wang were naturally the athletes to beat, but as in so many occasions no one managed to beat them. Always very consistent from the first dive, this was an opportunity for Chen to revalidate the 2008 Olympic crown, this time with a different partner (at the “Water Cube”, she got the gold with Xin Wang, while in London she paired with Hao Wang). This combination is not new and has been successful also at world level – in 2011, at the FINA World Championships in Shanghai (CHN), Wang and Chen had already obtained a comfortable victory. It was the third gold medal out of three diving events at these Olympics for China.

“Four years ago, I was younger and with less experience. I was a bit nervous. Today, I feel more mature and more relaxed,” declared Chen, who had also won the individual 10m event in Beijing. “Diving brings me something different. It brings something that most people cannot get,” added Chen, visibly happy with this outcome.

Winning with a total of 368.40, the Chinese team didn’t face any serious challengers during the five-dive final. Also like in the men’s 10m platform synchro, the British pair Sarah Barrow/Tonia Couch started the competition on a high note, finishing first after the inaugural dive and second at the end of the following attempt. Then, the “serious” things started (three more dives without DD), and the real hierarchy of this final started to be defined. As their compatriots Ivan Garcia/German Sanchez in the men’s (also silver), Paola Espinosa and Alejandra Orozco presented the most complicated programme of the final and this risk paid off. Despite a slight mistake of Orozco in the fifth dive, the Mexican pair managed to secure the second position (343.32) during the last three rounds of dives and conquer the second diving award for Mexico at these Games. Espinosa had already one medal in this event from 2008, having at the time combining her effort with Tatiana Ortiz. Moreover, she was also individual champion in the 10m platform at the 2009 FINA World Championships in Rome (ITA).

“We felt very well during this final. Alejandra was laughing all the time and we felt very confident,” recalled Espinosa. “I think the key moment of the final was after the first two dives [with limited DD]. When we finished those we said at the same time: ‘Now our dives are coming, the ones in which we are good at and the ones we’ve prepared for’,” added the Mexican star. Asked about partnering with a much younger diver (almost 11 years of difference), Espinosa simply told the media: “She may be young in age, but she has big dreams. And one of them was to win this medal. It’s done!”

A true role model in Mexico, Espinosa knows that her performances will remain in the country’s history, more used to great achievement s among its men divers. “I am aware that I opened many doors in Mexico, especially for the young girls, future champions in diving. I sincerely hope that they can even be better than me,” concluded Espinosa. Besides her two Olympic medals, the Mexican champion has also accumulated three awards at FINA World Championships: bronze in the 3m springboard synchro in 2003, the above mentioned title in 2009 and another bronze in 2011, also in the individual 10m platform.

The bronze medal went to Canada’s Roseline Filion/Meaghan Benfeito, also very regular throughout the final. Without committing any major mistake, the North American pair totalled 337.62 and also gave their country the second podium presence at these Games, after the success in the women’s 3m springboard synchro. It was the first Olympic medal for both the Canadian athletes, who were already bronze medallists in this event at their FINA World Championships, in 2005, in Montreal (CAN). “We were very happy to be the last ones diving in the final, as we didn’t have to wait for the remaining teams to perform their dives in each round. We were ready for this moment, we have prepared and trained ourselves in consequence and we achieved this good result,” considered Filion.

Australia, in the podium of two (2000 and 2008) out of the three events contested before London, this time finished in fourth with Rachel Bugg and Loudy Wiggins (formerly known as Loudy Tourky, bronze medallist in this event 12 years ago and silver medallist in the individual 10m in 2004). Germany continues without any medal in diving (and in all the aquatic events), after the sixth place of Christin Steuer and Nora Subschinski in London. Finally, the home heroes Sarah Barrow and Tonia Couch could not give full joy to their fans, concluding in fifth. —- FINA/Photo © Giorgio Scala