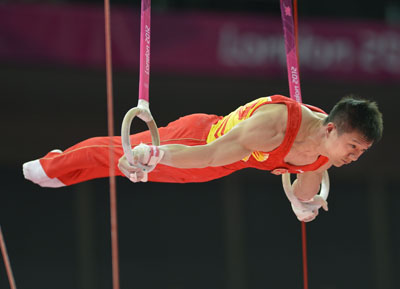 London – (GBR), July 30, 2012: A “perfect” China celebrated reclaiming their Olympic crown in the Artistic Gymnastics Men’s Team event but that was not the only talking point of a dramatic contest in which Japan took silver only after an appeal to the judges and Britain claimed an historic bronze. 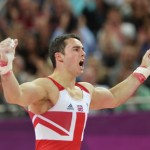 For China, the first nation to win back-to-back golds since Japan in the 1960s and 70s, their triumph came thanks to a faultless display which belied their less than impressive display in qualifying, where they ranked sixth. A delighted Feng Zhe said: “We don’t have any weaknesses – that’s our secret to beating Japan and everyone else. The last time we made a few mistakes, but today it was completely perfect.”

Asked to explain the difference between their efforts in qualification and today, Feng said there was no mystery. “We’re not sponsored by a betting company,” he joked. “We did make some mistakes in the qualifying round but not as some kind of smokescreen.”

One of the highlights of their performance was Zou Kai’s routine on Horizontal Bar which scored 16.400. That came on the fourth rotation but they had already been leading after the second and did not let their advantage slip.

Chen Yibing, a survivor of their Beijing 2008 triumph, said China – winners of the last five World Championship team golds – could go on and continue their dominance of the event: “Our coach and all my team-mates have made history. In the future we will have more rising stars with the ability to defend our title again.”

Japan’s Kohei Uchimura admitted that China’s pristine performance had contrasted with his team’s own showing. “China had no mistakes at all but we did – we made some mistakes. We had practised and thought we prepared all we had to but this is the Olympics, there’s a special environment and we couldn’t really do what we’d planned.”

If Japan eventually finished with another silver to match their placing in 2008, it looked initially like they had missed out on the medals altogether after Uchimura’s Pommel Horse routine earned him an initial score of 13.466. At that stage, Britain were in second and Ukraine third, but a Japanese appeal to the judges meant Uchimura’s score rose to 14.166 – yet there was still only limited satisfaction for Uchimura. “I couldn’t think anything when it was fourth; when the ranking changed, I was still not so happy,” he said.

Japan, in their defence, had not been helped by an injury sustained in the Vault by Koji Yamamuro, forcing him out of the event after the second rotation. “I think it was his left leg that he injured,” said Uchimura. One consequence was that Kazuhito Tanaka replaced him on Pommel Horse and fell.

Japan’s eventual reprieve spelled heartbreak for Ukraine, whose coach Yuliy Kuksenkov remained adamant his team were worthy of a medal. “I think we deserved the silver – the guys are quite disappointed,” he said, with some understatement.

“When you lose it is one thing but when you don’t think you’re anyway inferior [to the top three] and you take a place lower than you deserve, it is not nice,” added Kuksenkov who also explained that his son Mykola may be a doubt for the All-around final owing to injury.

Ukraine’s dismay contrasted with the celebrations in the British camp after they took their first Olympic men’s team medal since 1912. “We’re just happy to get this bronze medal, it’s amazing,” said Max Whitlock.

Kristian Thomas’s superb Vault on the third rotation was described as “a game changer” by Louis Smith; it earned the contest’s highest single score (16.550) and fired up a home crowd that included Princes William and Harry.

“That’s the first time I’ve ever stuck it in competition,” said Thomas. “I just remember landing on my feet and thinking ‘I haven’t taken a step, that’s pretty odd’. It was a fantastic feeling.”

Britain trailed Ukraine in fourth place entering the final rotation but took inspiration from the huge roar that accompanied them on to the Floor. “You heard how loud they were cheering before I started my floor routine,” said Thomas. “That gave me the little lift that sometimes you need in these situations, they played a massive part in our success today.”

If Britain ended their century-long wait for a team medal, the United States’ quest to reclaim the gold they last held in 1984 disintegrated as they placed fifth. John Orozco held his hand up for the costly mistakes he committed on Pommel Horse and Vault – his fall on landing in the latter came in the fourth rotation and effectively ended USA’s hopes of any medal.

“I can’t help but feel personally responsible because I did five events, I did the most out of everybody and I botched on two of them. It hurts,” said Orozco. “I fell straight on my butt on Vault and also on my Pommel Horse I did so poorly, it was pretty much like I fell twice.” —- FIG