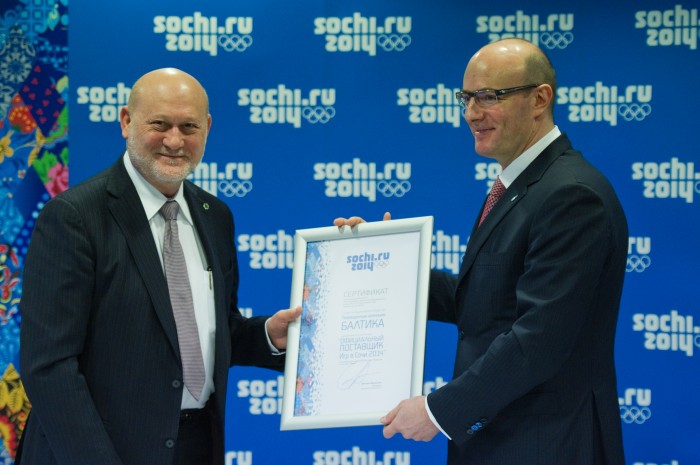 Baltika will now be able to use its official Sochi 2014 supplier status in marketing communications and on product packaging. Baltika owns 10 beer breweries across Russia and has a market share of 37,8%, with beer products available at 98% of points of sale around the country. The company is a prominent advocate of responsible drinking and works hard to promote its products in harmony with an active, healthy lifestyle.

“Baltika is honored to become the official beer supplier to the Sochi 2014 Olympic Winter Games. We know the taste of victory and the hard work required to achieve it; and we understand that in business and in sport, the spirit of fair play is the most important thing. We’re proud that winter sports fans will be able to toast the winners with Baltika beer.“

“Sochi 2014 has been attracting more and more top-class Russian and international companies, and this latest agreement is further evidence of the remarkable success of our marketing program. I hope, that The Sochi 2014 team will be raising glasses of Baltika beer to the success of the Winter Games and Russia’s national teams.”

Baltika Breweries has been a leading player in the Russian beer market since 1996. Baltika is owned by the Carlsberg Group. The company has its breweries in 10 Russian cities and produces over 30 brands of high-quality beer.