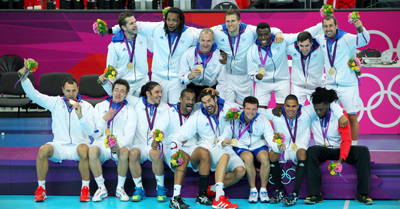 London – GBR, August 12, 2012: Thanks to their again brilliant goalkeeper Thierry OMEYER (FRA), France have won their second gold medal in the men’s Olympic tournament. But in contrast to their 28-23 final victory against Iceland in Beijing 2008, the 2012 final against Sweden was a real thriller, decided with the final buzzer.

History repeated. Like in the Beijing 2008 Olympic Games, France won the gold medal at the men’s handball competition. The Frenchmen had to wait until the final seconds of a nail biting final, before they won their second Olympic gold in history.

Their opponents Sweden fought bravely until the final buzzer, but earned their fourth Olympic silver medal after being defeated on Sunday (12 August) in a real thriller 22-21 (10-8) by France like Iceland did in 2008 when they lost by the clearer margin of five goals (28-23).

Just 40 seconds before the final buzzer, Luc ABALO (FRA) decided the match, scoring to put his side up 22-20. Swedish Niclas EKBERG (SWE) scored six times and with it, became top scorer of the competition with 50 goals, one goal ahead of Ivan CUPIC (CRO).

10 of the 14 French players celebrated their second straight Olympic gold medal, as Swedish coaches Staffan OLSSON (SWE) and Ola Lindgren (SWE) now have a fourth silver medal, their one as coaches to go with their three they won as players.

For the first time since 1992 both men’s and women’s handball champions have defended their gold medals, as Norway crowned themselves on Saturday (11 August) in their final against Montenegro. In 1992 it had been CIS (forerunner of Soviet Union) and Korea. Additionally, the Frenchmen are the first men’s champions to defend their title since 1992.

Even the attendance of Swedish King Carl Gustav did not push the Swedish team to their first-ever gold medal. The Scandinavians were on an equal level for a lot of the match; in the first half (which finished 10-8 in favour of France) and in the second half where France were pegged back from going too far ahead thanks to the aggressive Swedish defence and extraordinary goalkeeper Johan SJOSTRAND (SWE).

Sweden were perfectly tactically prepared against their final opponents, supported by thousands of their supporters in the stands.

Celebrated French goalkeeper Thierry OMEYER (FRA) kept the Swedes at bay, saving 11 shots in total – just like he did in the 2008 final against Iceland, and with them took his competition total to 94 shots in eight matches. This confirmed his title as the best goalkeeper at London 2012, further confirmed by his well-deserved place in the London 2012 Olympic all-star team, again like he did in 2008.

It was the fifth major title for the French team since 2008. They have been Olympic champions twice (2008, 2012), world champions twice (2009, 2011) and European champions (2010) once, but the London 2012 final was the last big match for the current French squad as a huge number of players will retire from the national team with a gold medal around their neck, which were handed over by IHF President Dr. Hassan Moustafa and IOC Member Sheikh Ahmad al-Fahad Al-Sabah.

Coach Claude ONESTA (FRA): “BEIJING 2008 was about us winning the Olympic gold after years of trying and people expecting us to add that gold medal to our collection. It was the only one we had not won. So it was relief to get it four years ago. This triumph here in LONDON is totally different. It was a situation where we had an old team of players who wanted to show everyone who doubted them that they were still able to be Olympic champions. That they still had the ability and skills to win an Olympic gold. And, I am delighted to say, they certainly did just that.

They showed they were not too old or finished.”  ”We had a poor European championships where we could not find any rhythm or form. Therefore people started to doubt us. But the whole team worked so hard in preparing for this competition for months and months. “I always believed in my players. I always believed that they still had one more excellent big competition in them, and that they could rise to the occasion here. So I am so happy for all of them, and the fans who came here to support us so noisily.”

Player Jerome FERNANDEZ (FRA): “This is the most beautiful day in my life. But now it is so hard to think how we can ever repeat this. How will be follow this up and do it again in four years time? I am so proud of my team because for eight weeks we have worked really hard and prepared so well to give our best effort here. We have won another title and it feels so fantastic.”

Coach Ola LINDGREN (SWE): “I am disappointed. We fought all 60 minutes with strong defence and active attack. It’s hard to lose the final with just one goal difference. Yet we are proud about our team. Everybody expected France to play in the final but hardly anybody thought of us as potential finalists.”

Player Tobias KARLSSON (SWE): ”We fought well as we have been doing in all games of the Olympic competition. We were close to success but didn’t have enough power to accomplish our winning task at the end.” —- IHF