London – GBR, August 05, 2012: If there was an image to retain from the final of the women’s 3m springboard, it would surely be the immense frustration of Tania Cagnotto (ITA), when after her fifth dive she saw a “3” next to her name. Minxia Wu, from China, had one last dive to perform but given her advance and dominance, it was sure that the “3” in front of the Italian’s name would soon be a “4”. When the final ranking was displayed on the scoreboard, the “4” was indeed there, in front of Cagnotto’s name, indicating that she had lost the medal by a mere 0.20 to Mexico’s Laura Sanchez. 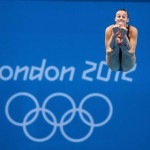 Participating at her fourth Olympics, and after another fourth place in the synchronised event here in London, Cagnotto’s disappointment was huge – she had qualified second in the semis and was hoping not only to obtain her first Olympic medal but also to get the first podium appearance for Italy in Aquatics at these Games. Her third dive, a forward 3 ½ somersault (pike, DD 3.1) was perhaps responsible for this outcome: due to a slight over rotation and an unsuccessful entry in the water, Cagnotto obtained a poor 68.20 points from the judges. From that moment on, she could not recover and finished at the podium’s door.

For the gold medal, things were clear from the beginning – Wu always appeared to be the final’s strongest and most regular diver. Without any notorious mistake during her five-dive programme, the 26-year-old Chinese star obtained her sixth Olympic award (414.00 points) and first individual gold after being champion in the synchronised event in 2004, 2008 and 2012, second in the 3m springboard in Athens 2004 and third at the “Water Cube”. She now shares the title of most medalled athlete in Olympic history with retired legendary diver Jingjing Guo (CHN). With this title, China now has five victories out of the five events held at the London Aquatics Centre and maintains quite preserved their hopes of getting a clean sweep of the eight Olympic titles at stake (a première in the Olympic history since the introduction of these events at the 2000 Olympics, bring the programme from four to eight finals).

“I was very emotional after my victory because all my dives were good and all my hard work paid off. As a team we are like a family, so even if we are a bit far away from our real family, we have a very solid group spirit,” said Wu. About the possibility of a clean sweep of gold medals for China: “We don’t care so much about the number of medals. We are just looking for performing well. The level of diving is increasing globally, not only in China, but all around the world.” On the inevitable comparison with Jingjing Guo: “She is a leader for me. We dived together for many years and thanks to her experience she was always a kind of older sister for me. She really helped me all the way through,” concluded Wu.

The best in the rest of the field was the second Chinese of the final, Zi He, who despite a not so good fifth attempt comfortably secured the silver medal in 379.20. He had won the gold with Wu in the synchronised event at the Aquatics Centre and had been also the 2011 FINA World Championships winner in the same event. For He, participating at her first Olympics: “This is a starting point, but from now on, I have to look upwards.”

The fight for the bronze medal was the most interesting of the final, between Cagnotto and Sanchez. Thanks to her successful fourth and fifth dives, the Mexican diver (also 26 years old) was able to offer Mexico its third diving medal (362.40) here in London, after two podium presences in synchronised events. An enormous achievement for the Central American nation, presenting a notable roll of honour in this discipline.

On the close rivalry with Cagnotto in this final, Sanchez declared: “It was indeed a very close competition; Tania has also a lot of experience, but in the end I was slightly better. Today, was my best competition and my goal was to bring a medal in my third Olympic Games.” The Mexican diver is the first female Olympic medallist in individual events and recalled the sacrifices needed to achieve this objective: “I had many problems and injuries, but I became stronger will all this adversity. I had many people supporting me and I sincerely thank them for the confidence they had in my performance,” she concluded.

Cagnotto finished fourth in 362.20, while the top-8 was completed by Sharleen Stratton (AUS, fifth), Jennifer Abel (CAN, sixth), Cassidy Krug (USA, seventh) and Christina Loukas (USA, eighth). Veterans Anna Lindberg (SWE), competing at her fifth Games and European champion in this event, concluded in 10th, while Emilie Heymans (CAN), with four medals in four consecutive Games since 2000, finished 12th and last of the final. —- FINA/Image © Giorgio Scala