Saint-Petersburg – Russia, Sept 16, 2012: From October 18 to 26, 2013, the second edition of the World Combat Games will be organized by SportAccord and the Russian Union of Martial Art (RUMA), in the city of Saint-Petersburg. After the first edition, which was held in Beijing in 2010, Judo will be present again in Russia, alongside 14 other martial arts and combat sports. 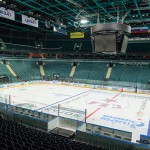 From September 5th to 7th, the IJF participated in a media workshop which was help in Saint-Petersburg. The aim of the gathering of the IF’s media and communication officers was to define the common communication and media strategy in the perspective of the next year’s games. Throughout the three-days meeting, Vincent Gaillard, SportAccord Director General, and Nathalie Smeeman, Marketing and Communication Director of the organization, presented the event itself as well as the goals to be achieve in the upcoming weeks and months:

– Maximize the media value for each sport,

– Create attention internationally and nationally for the general public,

– Help building up the athlete and federation’s image in relation with the games,

– Exchange between the participating International Federations,

– Find solution to educate the audience to the combat sports,

– increase the popularity of combat sports.

The city of Saint-Petersburg was also present during the meeting. Thus, Mr. Nikolay Rastvortsev, First Deputy Chairman of the Committee of Physical Culture and Sport (Governement of Saint Petersburg), expressed all the expectations that Saint-Petersburg as well as the Russian Federation were putting in the World Combat Games. During the second day of the meeting, Mr. Pavel Zhuravlev, CEO of RUMA, presented an extensive progress report to the International Federations, which then worked in groups to define a common communication strategy.

The social impact of combat sports and martial arts was highlighted throughout the workshop: “our activities are not only sports and competitions” were the keywords of all the International Federations, as well as “Education and education again”.

In the upcoming months, a World Combat Games brand will be defined and utilized to promote the games on a local but also national and international level: logos, mascots, pictograms are now being designed and will be released very soon. The Games will be largely TV broadcasted and the social networks as well as all the internet platforms will play an important role to advertise the Games and bring the concept of the World Combat Games to the largest audience possible.

After two days of fruitful exchanges, and just before leaving Saint-Petersburg, the IF’s delegates visited the competition venues in order to evaluate all the facilities that will be running during the Games. —- IJF