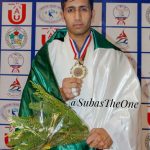 Last Commonwealth Games Silver medalist Shah Hussain Shah defended his title of south Asian champion in weight category of +100kg by defeating arch rival India in Preliminary round, beat Nepal in semifinal and finally won Srilanka in final with a one sided fight.

Qaisar khan Afridi a talented youngster from FATA clinched South Asian Gold for the first time as in last South Asian Games 2016 he could secured bronze.

In -90kg he proved his worth as he won gold by defeating India in preliminary round,Beat Srilanka in semi final and beat Nepal in final.

While Maryan in -52kg got silver medal by defeating Bangladesh in first round, beat Nepal in semi final but lost against India in final.

Humaira Ashiq beat Srilanka in first round beat Bangladesh in 2nd round while beat Nepal in semi final. In final she lost against India and got silver medal.