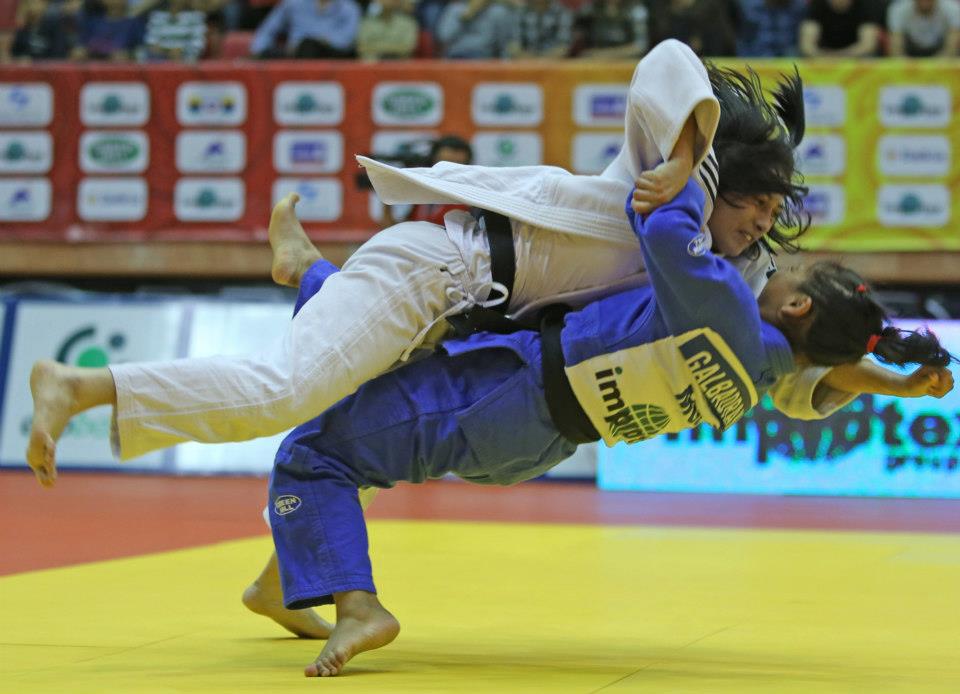 The second Grand Slam of the year, Baku 2013, is set to grace the Sport Olympic Complex as the Azerbaijan Judo Federation hosts one of the World Judo Tour’s four annual Grand Slam events for the first time in history on Saturday 4 and Sunday 5 May.

Ebru SAHIN (TUR) will compete in Baku with her European bronze success from a week ago still fresh in her mind. The -48kg prodigy topped the podium in the Azerbaijan capital last year while teammate Sumeyye AKKUS (TUR) will offer strong opposition.

AKKUS has already entered unchartered territory this year as she won Grand Prix bronze on home soil in Samsun and placed (5th) at the European Championships for the first time in her career. Those back-to-back results in her last two competitions will ensure she steps onto the tatami with a newly-found level of confidence and expectancy.

World number 12 Mareen KRAEH (GER) has stepped onto the medal podium at both Grand Prix events this year with first bronze in Dusseldorf and then silver in Samsun.

KRAEH has finished in fifth-place at Grand Slam events on four occasions as she still strives for her first silverware from one of the four annual showpiece events. The long-time standout will be on a mission to take home one of the few medals yet to grace her well-stocked medal collection.

Tsolmon ADIYASAMBUU (MGL) showed her ability with a bronze medal at the Samsun Grand Prix while Gili COHEN (ISR) will compete one week after the most significant result of her young career, a seventh-place finish at the European Championships.

Asian Championship bronze medallist and world number 13 Sumiya DORJSUREN (MGL) will be out to capture her first Grand Slam medal of her flourishing career. Teammate and former world bronze medallist Bundmaa MUNKHBAATAR (MGL) knows exactly what it takes to stand on a Grand Slam medal podium with wins in Paris and Moscow among her impressive resume.

Exciting young German talent and world number 19 Johanna MUELLER (GER), who captured a silver medal at the Samsun Grand Prix, will strive to battle her way into medal contention once again on the World Judo Tour, while one would have to pay attention at Miryam ROPER (GER), who can also create a surprise.

World number six Yarden GERBI (ISR) has been a standout name on the IJF circuit this year with a bronze medal and silver medal to show for her efforts at the Dusseldorf and Samsun Grand Prix respectively. Her eye-catching run continued with a bronze medal at the European Championships a week ago. Wen ZHANG (CHN) is the only Chinese judoka in action this weekend and will no doubt embrace that position, but she will be opposed to GERBI on the occasion of her first fights. Among other favorites are Mariana BARROS (BRA), Martyna TRAJDOS (GER) and Tina TRSTENJAK (SLO).

World number three Kelita ZUPANCIC (CAN) will be aiming to become the world number one with victory in Baku. With world number one Lucie DECOSSE (FRA) and number two Kim POLLING (NED) both absent, ZUPANIC will look to take full advantage as a silver or gold medal would crown a new leader in the -70kg category.

World number seven Laura VARGAS KOCH (GER) is a judoka on the rise with Grand Slam, Grand Prix and European Championship medals all to her name this year while Sally CONWAY (GBR) will aim to reproduce the form which saw her top the Samsun Grand Prix medal podium.

The -78kg category will make intriguing viewing as three members of the world top 10 feature in Baku. World number seven Catherine Roberge (CAN), number eight Amy COTTON (CAN) and number nine Abigel JOO (HUN) will be out to show why they are three of the best judoka in their category. World number 13 and Samsun Grand Prix winner Luise Malzahn (GER) will have ambitions of her own as she bids to close the gap with the leading forces in the -78kg hierarchy.

World number 10 and Samsun Grand Prix winner Amartuvshin DASHDAVAA (MGL) is the top seed and will be the man to beat in the -60kg category. The hosts will hope world number 16 Ilgar MUSHKIYEV (AZE) can set them off on the medal trail while MILOUS (FRA) is a three-time Grand Slam medallist which begins to show why he’s ranked the word number 11. Dusseldorf Grand Prix silver medallist and world number 15 Diego Santos (BRA) also features alongside 2013 European bronze medallist Ashley MCKENZIE (GBR) who will be brimming with confidence after winning his first senior continental medal a week ago.

World number three and Paris Grand Slam silver medallist Tumurkhuleg DAVAADORJ (MGL) will have his eyes on the top prize. Patrick GAGNE (CAN) will be fresh from an impressive Pan-American silver medal and could put himself into top 16 to secure a coveted World Masters spot if he is successful in Baku. Two-time world silver medallist Leandro CUNHA (BRA) could accomplish the same feat to book a place on the place to Tyumen.

World number seven and Pan-American champion Nick DELPOPOLO (USA) will fly the flag for America as their only judoka in action and will be desperate to improve on three previous fifth-place finishes at Grand Slam events. World number 16 Zebeda REKHVIASHVILI (GEO) won European bronze last time out and will be tipped to boost his position on the world ranking list with another polished performance.

World number four and London 2012 Olympic bronze medallist Antoine VALOIS-FORTIER (CAN) will cement his position firmly inside the world top 10 with a positive result in Baku. The race for a place at the World Masters is delicately poised as former Paris Grand Slam bronze medalist Alain SCHMITT (FRA), European silver medallist Tomislav MARIJANOVIC (CRO), Asian bronze medallist Uuganbaatar OTGONBAATAR (MGL) and rising local judoka Tural SAFGULIYEV (AZE) could move inside the top 16 with a triumphant display at the second Grand Slam of the year.

Zviad GOGOTCHURI (GEO) is the leading figure in the -90kg category and has form on the World Judo Tour this year with a bronze medal at the Dusseldorf Grand Prix. Alexandr JURECKA (CZE) poses an ever-growing threat as he bids for a first medal at this level having clinched a bronze medal at the Samsun Grand Prix. Axel CLERGET (FRA) was edged out of medal contention in Dusseldorf and will be out to secure his first medal on the IJF circuit since moving up from the -81kg category last year.

Elmar GASIMOV is one of the brightest talents to emerge from the host country in recent times and is the top seed in his homeland. At the other end of his career, veteran Elkhan MAMMADOV (AZE), a former world bronze medallist, and will fancy his chances of success before a home crowd. Dusseldorf Grand Prix bronze medallist Martin PACEK (SWE) and Samsun Grand Prix bronze medallist Dmytro LUCHYN (UKR) could curtail the domestic hopes of -100kg glory as they continue to work their way up the rankings.

David MOURA (BRA) and teammate Walter SANTOS (BRA) will both hope to grace the +100kg medal podium as two of the leading judoka to contest the category on Sunday. As the world number 14 MOURA (BRAZ) can close on the +100kg elite with a medal-winning performance while SANTOS (BRA) could surge up the rankings from number 28 to muscle in on the World Masters picture with a podium place of his own. Fellow seeds Andrey VOLKOV (RUS) and Sugarjargal BOLDPUREV (MGL) will be among those out to stamp their name on proceedings in the heavyweight field. —- IJF