Osaka, Nov 23, 2018: The Osaka Judo Grand Slam 2018, the fifth and final Grand Slam of the season, will grip the world from Friday 23 to Sunday 25 November at the Maruzen Intec Arena, Japan.

After Grand Slam events in Paris, Düsseldorf, Ekaterinburg and Abu Dhabi, the IJF World Judo Tour has arrived in the sport’s homeland and host nation of the next Olympiad.

The hosts are able to pick four judoka in each of the 14 weight categories and have therefore selected a 56-strong team that is overflowing with champions. Olympic champions BAKER Mashu and ONO Shohei and Japan’s seven reigning world champions from Baku 2018 will all be in action at home.

I would like to thank YAMASHITA and his team for the excellent organisation here.

We’re in Osaka and not Tokyo due the work which is going on in preparation for Tokyo 2020.

I would like to wish good luck to you all.”

“Good afternoon everyone, welcome to Japan.

Dear IJF Executive Committee members, all member nations and all members of the judo family, we will follow this event next year with our 2019 World Championships in Tokyo and then we have the Olympic Games in 2020.

We are excited for the next three days of judo and I sincerely wish you all the best of luck here and a pleasant stay in Japan.”

Rio 2016 Olympic champion and two-time world champion ONO Shohei, who will be competing on the IJF World Judo Tour for the first time since winning the Düsseldorf Grand Slam since February, will be unseeded.

The world number 25 won the Asian Games in August and his return to IJF duty has been hotly-anticipated.

As part of the build-up to the Grand Slam, ONO was featured in a special compilation of his best ippons on the IJF World Judo Tour. 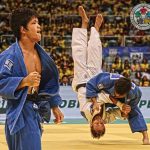 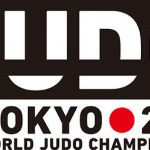 The 2019 World Judo Championships Logo was officially unveiled by the AJJF this week.

YAMASHITA Yasuhiro, All Japan Federation President and IJF Development Director, shared the importance of the competition and it’s branding.

“It is with great honour for us to host the 2019 World Senior Judo Championships in Tokyo,” said the IJF Hall of Famer.

“The logo integrates a black belt going through the word JUDO; symbolizing the profound history and lineage of our sport.

“The championships will take place at the Nippon Budokan: built for the first edition of the Judo event at the 1964 Tokyo Olympic Games.

“Japanese Judo family is fully committed in delivering an unforgettable event at this historic venue. See you in Tokyo.”

“The main visual of the 2019 Tokyo World Judo Championships integrates a black belt as a straight line, connecting the lineage of judoka.”

“Starting with the father of Judo, Kano Jigoro Shihan, nine legends of Judo, from past pioneers to current stars are exhibited. The world’s best will gather for these Championships; it will be the flagship event leading up to the 2020 Olympic Games.

“This visual was created to convey the message that “the spirit of Judo continues to flourish, and will be passed on for generations to come.”

Who will win gold in Osaka?

Former world champion MUNKHBAT Urantsetseg (MGL) has held on to to her status as the world number one after victory at the Abu Dhabi Grand Slam in October. Five-time Grand Slam winner MUNKHBAT won Japan’s Grand Slam in 2016 and took silver in 2013 and 2017.

The 18-year-old has been the breakout star on the IJF World Judo Tour this year and has embraced the media spotlight with enthusiasm and a charming demeanour heading into Japan’s first Olympic Games since 1964.

ABE will join World Championships silver medallist SHISHIME Ai (JPN) who the teenager unceremoniously took the red backpatch from in Baku with an uchi-mata in golden score.

Kachakorn WARASIHA (THA), who won bronze at the Asian Games in August, is one outsider who could make her mark in Osaka.

The Tsukuba University judoka has made sporadic appearances on the IJF World Judo Tour since 2015 but will be well supported as she lives and trains in Japan alongside her two sisters Akari (-48kg) and Yuriko (-57kg) who will also compete in the final Grand Slam of the season.

World champion YOSHIDA Tsukasa (JPN) is one of the most consistent performers in the sport and is now the owner of the red backpatch in the -57kg category for the first time.

YOSHIDA, who will be joined by her younger sister and Junior World Championships silver medallist YOSHIDA Sana (-48kg) on IJF duty for the first time, has reached the podium at her last 10 events and will be aiming to win her home Grand Slam for the fourth time.

World Championships bronze medallist DORJSUREN Sumiya (MGL) is the arch-rival of YOSHIDA and would love to win her first IJF gold medal in 2018 in the sport’s homeland.

One-time Grand Slam gold medallist DORJSUREN, who claimed the Abu Dhabi title in 2017, will be reunited with the second world bronze medallist in Christa DEGUCHI (CAN) and the world number five will be confident of winning her first IJF medal in her native Japan.

Olympic champion Rafaela SILVA (BRA) won the Cancun Grand Prix in October while Tashkent Grand Prix winner Theresa STOLL (GER) will expect to improve on her seventh-place from a year ago.

Olympic champion Tina TRSTENJAK (SLO) won bronze at the Abu Dhabi Grand Slam in October and, as would be expected, has been in the frame for medals all season long.

World bronze medallist TRSTENJAK has only struck gold once in 2018 at the season-opening Grand Prix in Tunis but has a strong record on Japanese soil.

The Slovenian ace won gold in 2014, silver a year later and bronze in 2016 and 2017 and is in line to medal at the event for the fifth year in a row which is unheard of for a non-Japanese judoka.

Asian Games winner NABEKURA Nami (JPN) is the closest domestic judoka to TASHIRO while European Championships bronze medallist Martyna TRAJDOS (GER) will be one of the leading international names aiming to outperform the Japanese.

Two-time and reigning world champion ARAI Chizuru (JPN) has medalled at her last 12 events to take full control of the weight category.

Following the retirement of Rio 2016 Olympic champion TACHIMOTO Haruka (JPN), ARAI has seized her opportunity by winning two world titles in a row and the -70kg category should be one of the easiest decisions for the hosts at the Tokyo 2020 Olympics.

World Judo Masters winner Maria PORTELA (BRA) won bronze at Japan’s Grand Slam in 2015 and would crave a tilt at ARAI in Osaka.

World champion HAMADA Shori (JPN) is the defending champion from the 2017 Grand Slam in Japan and will keen to do her new red backpatch justice when she gets to wear it in Japan of all places in her first competition since Baku. HAMADA won all five of her contests in Azerbaijan by ippon to power to her first world title and install herself as the current incumbent for Japan at -78kg.

The All Japan Judo Federation has a plethora of options at this weight with all four of their picks for Osaka having won IJF gold this year.

Asian Games winner SATO Ruika (JPN), Cancun Grand Prix winner TAKAYAMA Rika (JPN), former world champion and Budapest Grand Prix winner UMEKI Mami (JPN) receive the nod alongside HAMADA and it is a relatively safe call to foresee the pick for Tokyo 2020 being one from that quartet of winners.

The 22-year-old, who started practicing the sport at the Kodokan Judo Institute, won her home Grand Slam in 2016 and 2017 and will expect to complete the treble on Sunday. World Championships silver medallist Idalys ORTIZ (CUB) has made the trip to Osaka.

Asian Games winner SONE Akira (JPN), who is still in high school, won the Hohhot Grand Prix in May but has lost back-to-back Grand Slam finals at home to ASAHINA and will desperate to reverse that outcome on day three.

Three-time and current world champion TAKATO Naohisa (JPN) has locked up the division by winning his last seven events and is unbeaten on the IJF World Judo Tour since 2016.

Tokai University judoka TAKATO starts as the favourite with a potential ninth Grand Slam title within his grasp which would be a new record as he’s currently tied on eight with TACHIMOTO Megumi (JPN).

Japan’s class at -60kg does not end with TAKATO but rather it only starts with the Park 24 judoka.

Rio 2016 Olympic champion ONO Shohei (JPN), the thrower of throwers, will compete in his second IJF event of the season.

The 2013 and 2015 world champion won the Düsseldorf Grand Slam in February and claimed the Asian Games title in August.

The Tenri University judoka will send pulses racing again in the stands and for those watching online and on television with his explosive judo as he makes his long-awaited return to the IJF tour where his welcoming committee will include double Olympic medallist Lasha SHAVDATUASHVILI (GEO) and three-time world champion and double Olympic bronze medallist EBINUMA Masashi (JPN). ONO, who since Rio 2016 has completed his thesis and gone toe-to-toe with Japan’s best heayvweights at the All Japan Openweight Championships, has never faced former world champion HASHIMOTO Soichi (JPN) on the IJF World Judo Tour but that dream clash will have to wait as the latter has pulled out due to an elbow injury.

Six out of the eight seeded judoka are European but that statistic will be chewed on by everyone in the category in Osaka except the Japanese.

Former world champion NAGASE Takanori (JPN), who returns to IJF World Judo Tour for the first time since 2017, falls into the latter category having slipped down to number 84 in the world.

Hohhot Grand Prix winner SASAKI Takeshi (JPN) has offered a handful of opportunities in the absence of NAGASE and now has to perform with him back in the fold.

Olympic champion BAKER Mashu (JPN) will grace his home Grand Slam for the first time since 2015.

BAKER took silver at the Düsseldorf Grand Slam in February and finished fifth at the Hohhot Grand Prix before winning bronze at the Asian Games in August.

This is currently the case with BAKER and ONO, and was true of London 2012 Olympic champion MATSUMOTO Kaori (JPN) in her build-up to Rio 2016.

Former world champions WOLF Aaron (JPN) and HAGA Ryunosuke (JPN) will both be aiming to recapture a red backpatch next year and a gold backpatch in 2020 but only one of them can be selected for the Games.

Asian Games winner IIDA Kentaro (JPN) will be one more thrilling young talent to follow from the hosts as he battles to close the gap to WOLF and HAGA.

The 2013 World Championships competitor has invited by the Solidarity of International Judo Education (SIJE), which will chair by AJJF President and IJF Development Director YAMASHITA Yasuhiro, to Japan for a four-week training camp, the majority of which has spent at Tokai University under the watchful eye of Japanese national team head coach INOUE Kosei who also supports the project.

POPOLE has supported by the IJF to compete under their name in Osaka.

World champion Guram TUSHISHVILI (GEO) will show that he’s a fighting champion by taking on the mighty challenge of the Japanese Grand Slam knowing that there’ll be four judoka from the host nation to contend with.

TUSHISHVILI competes in the sport’s homeland for the first time in his career and his new red backpatch will act as the target for the rest of the category.

Olympic champion Lukas KRPALEK (CZE) finished fifth in the Worlds and has the added incentive of coming out of last year’s final second best after a lengthy golden score duel against OGAWA Yusei (JPN).