London, July 22, 2018: The China International Mixed Martial Arts Federation has gifted half a million dollars prize money for medallists and awardees at the 2018 IMMAF Asian Open Championships and Junior World Championships, taking place in Beijing from 10 to 15 September. 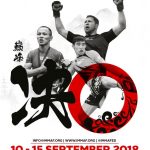 The prize money will be divided between Gold, Silver and Bronze medallists of the two tournaments, and awardees for Best Male and Female Athletes, Best Coach and Best Team.

Further details and criteria for individual prizes will be confirmed once the tournament brackets have closed and number of divisions and potential medallists have been consolidated.

Brackets are currently open to applications from Atom weight to Lightweight for women and Straw weight to Super Heavyweight for men.

IMMAF also today announced that it has unfortunately been forced to push forward the dates of the tournament by one week to 10 to 15 September.

This is due to a China-Africa Cooperation Forum taking place in Beijing, for which the Beijing Public Security Bureau has called a mandatory halt to all other activities.

IMMAF apologises for all inconvenience caused and registered participants who would like to withdraw are entitled to refunds.

International Mixed Martial Arts Federation’s nation vs nation tournaments play out over up to 5 days, with competitors competiting up to 5 times under IMMAF Unified Amateur MMA Rules.

Both Beijing tournaments are open events, welcoming elite amateurs from all around the World.

The Junior event will be IMMAF’s first Junior World Championships open to 18s- 21s only, provides better opportunity for rising stars to shine against competitors within a similar range of experience.

It also creates a safer competition environment for younger adults who have not yet reached their physical peak. The Senior Asian Open is open to over 18s with no age limits.

Athletes must apply through their IMMAF or WMMAA affiliated national federation.

“I would like to thank CIMMAF President, Wei for the generous financial donation, intended to support the development of our top athletes (Million dollars prize money).

As a former competitor, I fully understand the sacrifices that athletes have to make in order to hone their craft and the financial hardship that can go with it.

While MMA is unrecognized by many countries, are athletes often work hard to self-fund their way to IMMAF competitions.

And there are many pressures in MMA for athletes to go pro too early, for small cash, and we at IMMAF would like to encourage participants to remain at amateur sharpening their game for as log as possible for their own development and longevity, as well as that of the sport.

I am thrilled, that the generosity of Wei and of CIMMAF has given IMMAF the opportunity to bestow financial rewards on the stand-out athletes of the forthcoming IMMAF Asian Open and Junior Worlds.

“We would also like to apologise for all inconvenience caused by the change in competition dates, which is a matter outside IMMAF’s control and in compliance with host country law.

We pledge to ensure that participants who have already registered do not lose out and are refunded for losses caused by the date change.” —- IMMAF