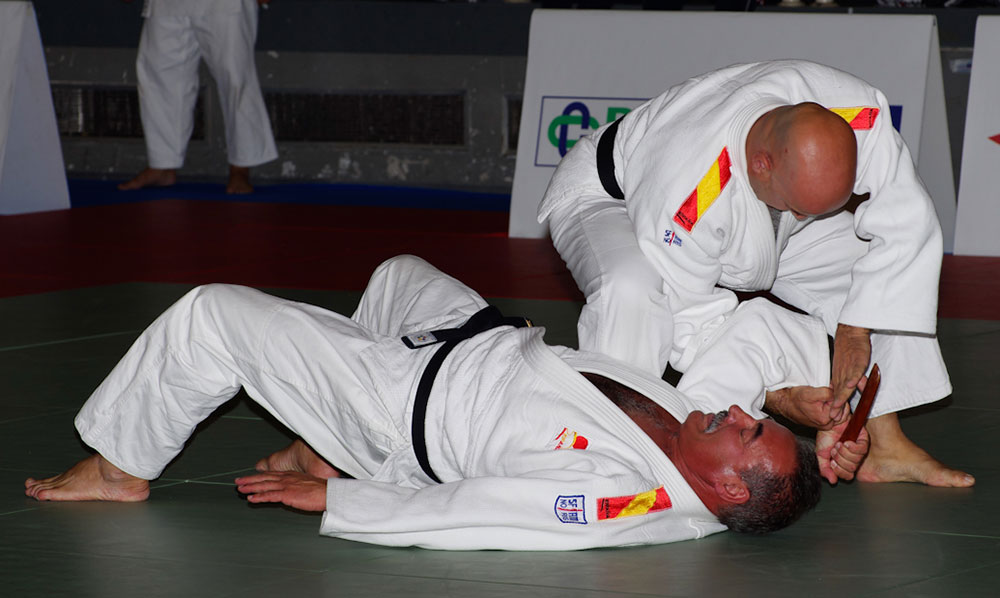 Pordenone – Italy,, Sept 23: The fourth edition of the Kata World Championships is taking place this weekend in Pordenone, Italy, a town situated near Venice and Treviso in Veneto Friuli. This event is organized by the FIJLKAMA (Italian federation) in collaboration with local clubs: Villanova Sports Center, Tarcento Judo club, the region and the city of Pordenone. Accustomed to organizations at the European level, the organizing committee has already proven and demonstrated, during the first day of the competition, that they were more than capable to organize a worldwide event. This was highlighted by the presence of a numerous audience.

The president of the organizing committee, Stephano Stefanel, and his team lead by “maestro” Muzzin, have already passed their first challenge: to mobilize a city around the event. For them, the championship began several weeks ago with the awareness campaign for school children, an exhibition on Japan and a conference with representatives from the Kodokan.

The ranking is established as follows: the participants are divided into two groups, the top 3 in each group qualify for the finals. After the preliminaries, the scores are reset and another judgment is given to establish the final ranking. After each performance, the points are displayed on a screen so the audience can follow the progress of the classification. 5 judges evaluate all phases of ceremonial and technique.

The first day saw the domination of the Japanese pairs in all 3 events, and a record for Yokoyama and Omori who won their fourth title in four participations! Italy did really well, too, and France got its first medal at the world level. In the Nage No Kata division, the title remains the property of the current world champions, Sakamoto – Yokoyama (Japan). It is to be noted, in this category, the beautiful silver medal of the Koreans and the comeback of the Romanian pair, Surla – Fleisz, ranked in 2009 and 2010. In Katame No Kata, the podium was completely renewed.

The Kata World Championship just came to an end with the last 2 events organized during the second day of competition in Pordenone, Italy: Kime No Kata (24 pairs) and Goshin Jitsu (30 pairs). Without any surprises, the Japanese pairs dominated the last two categories. In the Kime No Kata division, the pair, IMAO-SHIMIZU followed the triple world champions TAKEISHI and UEMATSU. The Spaniards, BLAS and CHUNG, won the silver medal as they already did in 2009 and 2010, the bronze medal being won by the Belgium pair, DE MARTELEINE – INGHELBRECHT, who got their first world medal.

The same scenario took place in the Goshin Jitsu division, when Japanese TAKEDA and MIYAZAKI inherited the world title from their compatriots, HAMERA and YAMAZI, who were 3 time world champions during the previous editions of the competition. Second in 2010 and 2011, the Italians, VOLPI and CALDERINI, again obtained a beautiful silver medal in their home country, the bronze medal going back to Spain with the pair VERANO and GONZALES, who were already at that level in 2009 and 2011.

“A Very High Standard” for the IJF President

Mr. Marius Vizer, who was present at the event, declared that “The Kata World Championship has proven to be of very high standard. The event now needs to be given more importance and professionalism … it was a great event, we are on the right track,” concluded the IJF President.

For Mr. UEMURA, President of the All Japan Judo Federation and of the Kodokan, “The development of Judo also involves kata competitions. It is an activity that should be promoted and sustained with strong actions.”

As a consequence of this declaration, Mr. Uemura said that the 2013 edition of the event should be organized in Japan, in the legendary Kodokan.

Satisfaction for the Organizing Committee

From the organizing committee’s point of view and that of its chairman, Stephano Stefanel, the contentment was evident: “I am satisfied and I congratulate my team and all our partners for their involvement. I hope that the delegations enjoyed their stay.” The Mayor of the city of Pordenone, Claudio Pedrotti, also declared that: “A whole city and region were mobilized for this event, it was a great moment for us.”

To conclude, Franco Cappelleti, director of the IJF Kata Commission, observed that there was positive growth in all areas: “The Kata World Championship was created only 4 years ago, today we are pleased to note that more and more countries are involved. The technical level is excellent and the number of countries which earned a medal has increased. I hope that this competition will find its place among the major events organized by the IJF.”