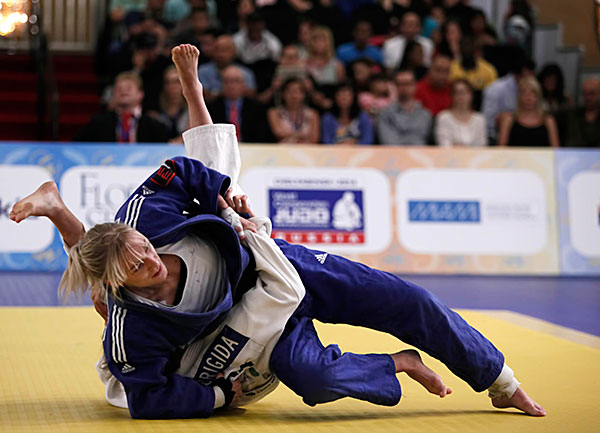 Miami – USA, June 15, 2013: The opening day of the first Judo Grand Prix in America captivated the iconic tourist resort of Miami as the stars of the World Judo Tour competed at the Doral Legends Ballroom on Saturday.

Seven weight categories were in action as the women’s -48kg, -52kg, -57kg and -63kg categories and the men’s -60kg, -66kg and -73kg categories were the centre of attention. The opening ceremony saw distinguished officials from the PJC, USA Judo and the IJF share the stage to open the event. Mr. Paulo WANDERLEY, Pan American Judo Confederation President and IJF Vice President, said: “I welcome all authorities, members of national federations and delegations and especially all the athletes to the Miami Grand Prix 2013. Once again Miami has organised a top judo event and for the first time a Grand Prix. The organisation has been excellent and I’m sure we’ll continue to see some superb judo. I would like to thank and congratulate USA Judo and President Mr. Lance NADING for making the event a reality.”

Mr. Vlad MARINESCU, Director of the IJF Presidential Office, said: “It’s an honour to see such an event in Miami and it’s a big pleasure for us to be here. We’d like to congratulate USA Judo President Mr. Lance NADING and USA Judo Chief Executive Officer Mr. Jose HUMBERTO RODRIGUEZ and Mr. Luigi BORIA, the Mayor of Doral City. We congratulate you on your excellent results at the London 2012 Olympic Games – Olympic champion Kayla HARRISON and bronze medallist Marti MALLOY – these results will pave the way for your continued success in judo.”

Mr. Jose HUMBERTO RODRIQUEZ, USA Judo Chief Executive Officer, said: “Welcome one and all to Miami, welcome to Doral. Thank you for being here, I hope you enjoy your stay and the event.”

Mr. Luigi BORIA, Mayor of Doral City, said: “I want to welcome you all and all the members of this beautiful event. On behalf of USA Judo I declare this event open and god bless you all.”

On Friday evening an official reception took place at the venue to launch an exhibition, Art of the Olympians, and to welcome all the delegations to Miami on the eve of the opening day of competition. Mr. Jose HUMBERTO RODRIQUEZ, USA Judo Chief Executive Officer, said: “We are very proud of the exhibition and thank the Art of the Olympians Museum for all their efforts. We are joined by some special people today and that includes one very special lady who I’ve had the pleasure to be around while she’s grown into being a leading light in the sport. I like to think of myself as working for our athletes and our Olympic champion Kayla Harrison, we all know that she is a champion on and off the tatami. We have a great network of staff who have all worked tirelessly to make this event possible and we salute your efforts.”

Mr. Luigi BORIA, Mayor of Doral City, who was a special guest of honour at the official reception, said: “We are excited to see beautiful judo, beautiful people and a beautiful competition this weekend.” A special presentation was made to USA Judo officials by Mr. Vladimir BARTA, IJF Head Sports Director, who had the honour of presenting a gold plaque to mark the first Judo Grand Prix in Miami.

World number four Yanet BERMOY ACOSTA (CUB) and London 2012 Olympic bronze medallist Priscilla GNETO (FRA) produced an enthralling -52kg final in Miami. Both judoka cancelled each other out to move the contest into golden score and could only be separated after six breathless minutes. BERMOY ACOSTA and GNETO demonstrated their fitness and desire to win but only one could be triumphant and a shido against GNETO brought an end to proceedings as the Cuban gained an important victory over one of her toughest rivals.

The first bronze medal was clinched by World Judo Masters silver medallist Tsolmon ADIYASAMBUU (MGL) who dominated 18-year-old Junior European champion Sappho COBAN (GER) with a win after 97 seconds by ippon. The second bronze medal contest saw Baku Grand Slam bronze medallist Mareen KRAEH (GER) face Athens 2004 Olympic bronze medallist Ilse HEYLEN (BEL). Both judoka were penalised for passivity which ensured they would go into golden score after no scores were registered in the opening five minutes. A further two and a half minutes was required to settle the contest as KREAH was penalised once again to hand victory to the evergreen HEYLEN.

London 2012 Olympic bronze medallist Marti MALLOY (USA) entered the event with high expectations and rose to the occasion as she battled her way to gold in front of her home crowd. MALLOY lined up in the -57kg final against the highly-talented Hedvig KARAKAS (HUN) who finished in fifth-place at both the London 2012 Olympic Games and 2013 European Championships. MALLOY inspired chants of ‘USA’ with a positive start and clinched the gold medal with her heralded ne-waza skills as she forced KARAKAS to submit to a juji-gatame.

“When I heard there was going to be a Grand Prix on home soil, I wanted gold,” said Malloy of San Jose, CA, on her way to the podium to collect the precious medal. “This is all I’ve thought about. I wanted a win on home soil. I’ve been training very hard for this tournament for the last few months. I wanted to hear the National Anthem, and I wanted U.S. supporters to hear it on home soil. It was great to be on the mat and to hear everyone cheer to USA. It is amazing to feel that support, and I am very proud.” (source: Ernest Pund, USA Judo Communications)

The first bronze medal went to Serbian national champion Jovana ROGIC (SRB) who defeated French national champion Helene RECEVEAUX (FRA) with an osoto-gari for ippon. The second bronze medal was won by Baku Grand Slam gold medallist Miryam ROPER who was the aggressor from the outset against Buenos Aires Pan American Open winner Connie RAMSAY (GBR). ROPER threw RAMSAY with an uchi-mata for a waza-ari and moved straight into osaekomi-waza to hold her down with a mune-gatame for victory.

The unstoppable rise of European champion Clarisse AGBEGNENOU (FRA) continued in Miami as the 20-year-old hotshot reclaimed pole position on the world ranking list with another golden showing. Former world silver medallist TANAKA Miki (JPN) was tasked with stopping the French phenom but was overpowered with a harai-makikomi which yielded a yuko for AGBEGNENOU to preserve her unblemished record in 2013.

Youngster Kherlen GANBOLD (MGL) emerged from a high-quality field to show why he is tipped for a big future in the sport. GANBOLD, who won his first World Judo Tour gold medal at the Qingdao Grand Prix last year, bested South American champion Eric TAKABATAKE (BRA) by a waza-ari which was awarded for a uchi-mata.

The first bronze medal went to world number 13 and top seed Luiz REVITE (BRA) who saw off Sergiu OLEINIC (POR) who finished in seventh-place at the European Championships in April. A shido against OLENIC was the difference as REVITE guaranteed a jump in the rankings. The second bronze medal was won by Batgerel BATSETSEG (MGL) who toppled former Pan American silver medallist Sasha MEHMEDOVIC (CAN) by ippon.

Former world bronze medallist Dirk VAN TICHELT (BEL) come from behind to deny London 2012 Olympic silver medallist Mikos UNGVARI in the -73kg final. Just when UNGVARI looked in control as he stormed in front with a waza-ari from an uchi mata, VAN TICHELT showed his quality by responding in the best possible fashion. The Belgian star threw UNGVARI with a drop seoi-nage for ippon to earn a highly-impressive gold. The -73kg category was also noted for its quantity as well as quality in Miami with 31 judoka contesting the busiest category at the Miami Grand Prix.

The first bronze medal was won by London 2012 Olympic bronze medallist Ugo LEGRAND (FRA) who marked his return from injury by edging former Pan American Games silver medallist Ludwig ORTIZ on penalties after a scoreless five minutes. LEGRAND had received one penalty while ORTIZ had two to his name. The second bronze medal was clinched by former European champion Kiyoshi UEMATSU (ESP) who ended the medal ambitions of Pan American silver medallist Magdiel ESTRADA (CUB) by catching him with a seoi-otoshi for ippon. —- Photos © IJF media by G. Sabau