Baku, Azerbaijan, Sept 27, 2018: Japan beats France, Japan retained their mixed team world title with a 4-1 victory over France in the final on the last day of the 2018 World Judo Championships.

HARASAWA threw with uchi-mata after two minutes of added time to give Japan the lead. Japan 1 – 0 France. 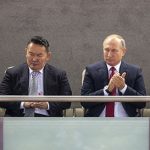 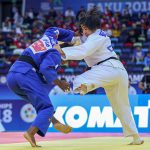 YOSHIDA opened the scoring with a waza-ari from a harai-makikomi and held down the French judoka with a ushiro-kesa-gatame for 10 seconds. Japan 2 – 0 France.

The Japanese pressured the Frenchman who was reprimanded with three shidos and was disqualified as Japan closed in on retaining their title. Japan 3 – 0 France. 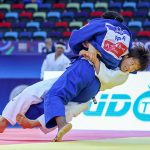 GAHIE pulled one back by ippon at the halfway point of the contest as the French judoka countered ONO for ippon. Japan 3 – 1 France.

MUKAI Shoichiro (JPN) was the hero as he defeated world bronze medallist Axel CLERGET (FRA) with a ko-soto-gake for ippon to end the 2018 World Judo Championships in style. Japan 4 – 1 France

The Russian, who was only in Baku to compete in the team event, threw with an o-uchi-gari and held down the Azeri to give his country the lead. Russia 1 – 0 Azerbaijan.

Ichinkhorloo MUNKHTSEDEV (AZE) fell to Anastasiia KONKINA (RUS) who first attacked with an uchi-mata and switched to an o-uchi-gari for ippon to double Russia’s advantage. Russia 2 – 0 Azerbaijan.

Alena PROKOPENKO (RUS) put her country on the brink of victory by throwing Gunel HASANLI (AZE) after 21 seconds for ippon with a ura-nage. Russia 3 – 1 Azerbaijan.

Mammadali MEHDIYEV (AZE) lost a must-win clash against Mikhail IGOLNIKOV (RUS) after 32 seconds of golden score. IGOLNIKOV threw for a waza-ari to seal bronze for his team as their lead was now insurmountable. 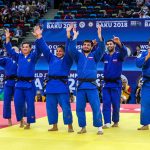 In the opening contest Sven HEINLE (GER) lost out to Cadet World Championships gold medallist KIM Minjong (COR) who picked up where he left off in Wednesday’s individual competition.

HEINLE was thrown by the 18-year-old with a morote-soei-nage as the unified Korean team went ahead. Korea 1 – 0 Germany.

KWON produced the only score of the contest, which was a waza-ari from a seoi-nage to put Korea half way to the podium. Korea 2 – 0 Germany.

Newly-crowned individual world champion AN Changrim (COR) defeated Igor WANDTKE (GER) by a waza-ari score. AN scored from a sumi-gaeshi with 40 seconds left on the clock to steer Korea towards victory. 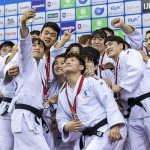