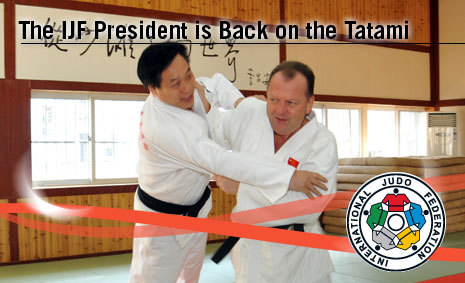 Thus on December 14th, the IJF President visited the Jinan No.26 Middle School in Jinan city, the capital of Shan Dong Province. Several other schools as the Jinan Huai Ying Primary School and 3 other institutions were also involved during the welcome ceremony.

Then two days later, on December 16th, Mr. VIZER was invited to go on the tatami at the China-Japan Friendship Qingdao Dojo, where he had the opportunity to lead a Judo clinic together with Mr.MA Wenguang, Mr.SHEN Zhigang, Mr.XIONG Fengshan and Mr.XU Dianping (GS of Qingdao Judo Association, General Director of the Dojo).

During the Judo clinic, Mr. Vizer explained how happy he was to be with kids on the tatami: “That reminds me, many years ago, when I was a judo teacher in the sports school of Oradea, my home town. I am really happy to see the seriousness of the judo promotion in the Chinese educational system and I am sure that you are doing the best investment for the future generations”, concluded the IJF President.