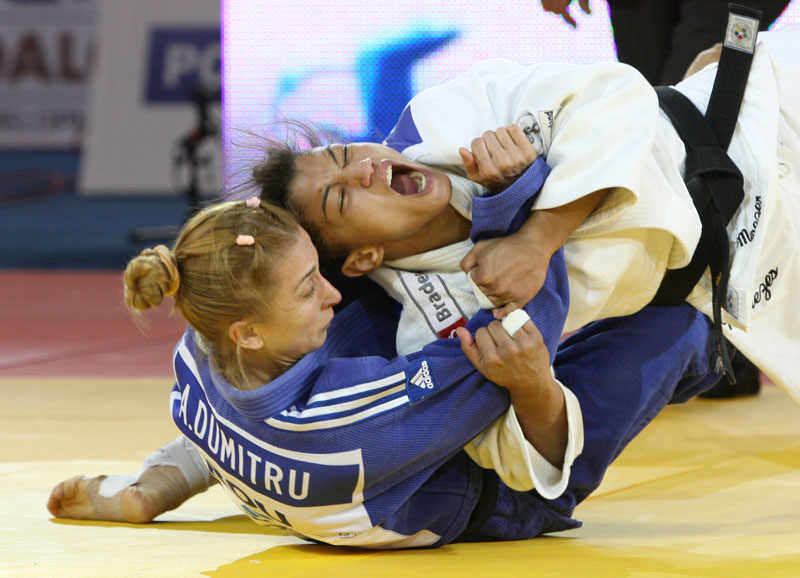 Moscow-Russia, May 26, 2012: FARMONOV, Seven weight categories were concerned: Women’s -48kg, -52kg, -57kg and -63kg and Men’s -60kg, -66kg and -73kg. Less than two months before the opening of the Olympic Games, the second Grand Slam of the year represents a very good occasion for many qualified athletes to test their physical condition and judo techniques. Please find, hereafter the resume and the results of today’s competition. 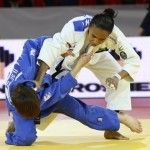 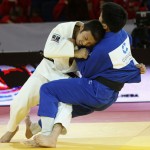 Before today’s competition, MENEZES was leading by three victories to two against the current Olympic Champion, Alina DUMITRU, from Romania. Undoubtedly, the two fighters know each another very well. Thus, after more than three minutes, nothing was scored but one shido on each side for passivity. 30 seconds before the end of the final, DUMITRU was again penalized, giving the lead to the Brazilian (yuko), who took the opportunity, immediately after, to score a waza-ari, with a seoi-nage. Tonight, MENEZES is leading by 4 to 2 against DUMITRU.

Without any surprise, the three favorites of the competition went through the preliminaries with no major difficulties. The first semi-final of the day opposed the young Brazilian Sarah MENEZES, currently third at the World Ranking list and Kristina RUMYANTSEVA, from Russia. Earlier this year, MENEZES won a bronze medal at the World Masters in Almaty, a silver medal at the Judo Grand Slam, Paris 2012, as well as silver medal in Montreal on the occasion of the Pan American Championships. After two minutes, the fight seemed to be quite tight, but MENEZES, who is now regularly present at the top world level, successively scored a waza-ari and a yuko that she was able to keep until the end of the fight.

The second semi final opposed the two finalists of the recent European Championship, Charline VAN SNICK (BEL) and the current Olympic Champion, Alina DUMITRU (ROU). Having won the European title again this year for the 8th time, Dumitru, is getting ready for the big Rendezvous of the upcoming Olympic Games, but the 21 year-old Belgian, VAN SNICK, who won the Judo Grand Prix, Düsseldorf, earlier this year, wanted to prove once again that she will be among the potential winners on July 28th in the British Capital. But, once again, VAN SNICK couldn’t do anything against the power of DUMITRU, who imposed a tactical fight. At the end of the semi-final, the Romanian was leading by waza-ari (penalties) and a yuko.

In the final of the men’s -60kg, the 2011 junior world champion, TAKATO, Naohisa (JPN) was opposed to the winner of the Judo Grand Prix, Amsterdam 2011, Tumurkhuleg DAVAADORJ (MGL). At the half of the fight, TAKATO was leading by a yuko corresponding to two shido given to DAVAADORJ. Just before the last two minutes, TAKATO scored for the first time with ko-uchi-gari for waza-ari. Nevertheless, the Japanese continued to attack in all the directions, but for no score until the very last seconds. One more yuko was scored by the winner of SOBIROV, just before the final gong. Like an already very experienced judoka, TAKATO won his first major title on the occasion of a senior competition.

The big surprise of that first day of competition came when World number one, the Uzbek, Rished SOBIROV was defeated by TAKATO Naohisa (JPN). After the 5 minutes of regular time and golden score, the conclusion of the fight was in the hands of the referees. When 2 flags for the Japanese were raised, TAKATO put a big smile on his face. After having won the Junior World title last year in Cape Town, this victory probably marks the beginning of a potential long career for him. In the semi final, he was opposed to GANBAT Boldbaatar, from Mongolia, and won by penalties, while in the second semi final, World number 6, Ilgar MUSHKIYEV (AZE) faced World number 10, Tumurkhuleg DAVAADORJ (MGL), who won his ticket to the final by waza-ari immediately followed by unstoppable immobilization for ippon.

Women’s -52kg: With MIRANDA, it makes 2 victories for Brazil

The Final opposed the number 4 and number 14 in the World Ranking List, respectively Erika MIRANDA (BRA) and Ilse HEYLEN (BEL). After a few seconds only, MIRANDA, scored a first waza-ari with the hip movement, which was really close to the ippon, followed almost immediately by a yuko with a morote-seoi-nage. After 1 minute and 30 seconds, the fight seemed more tight, the Belgian being able to launch a first strong attack but for no score. Just before the last two minutes, MIRANDA added a second yuko with a counter attack, just on the edge of the competition area. Strong and confident enough in her judo to maintain the score until the end of the fight, MIRANDA added a second victory for Brazil, after the win of MENEZES.

Among the four best seeded athletes of the day, three were still present in the semi finals. In the upper part of the draw Erika MIRANDA (BRA), World number 4, defeated Olga TITOVA (RUS) and Urantsetseg MUNKHBAT (MGL) to face her teammate, Eleudis VALEMTIM (BRA), to enter the final. This first Brazilian semi final was easily dominated by MIRANDA who controlled VALEMTIM, who was penalized for passivity.

In the second half of the table Ilse HEYLEN (BEL) and Jacqueline LISSON (CAN) qualified easily for the semi-final, the Belgian winning against LISSON by waza-ari to enter the final of this first day of the Judo Grand Slam, Moscow 2012.

The first minute of the fight was mainly on the floor, both finalist, Mirzahid FARMONOV (UZB) and TAKAJO Tomofumi (JPN), trying to immobilize here opponent. Then, attack after attack, coming from both sides, the final became very spectacular but none of the two fighters could find an opportunity to score. After three minutes of high intensity, TAKAJO begun to show tiredness. This was the signal for FARMONOV to engage a tremendous sumi-gaeshi, which scored ippon.

The category was quite open as the best seeded athlete of the day was Miyaragchaa SANJAASUREN, from Mongolia, currently 8th at the World Ranking List. To enter the semi-final, he won his two preliminary fights by ippon against the two Hungarian competitors, Bence ZAMBORI and Zsolt GORJANACZ. In the semi final, he was opposed to the Uzbek Mirzahid FARMONOV, who earlier during the preliminaries, defeated the Belgian, Kenneth VAN GANSBEKE, and the Canadian, Sasha MEHMEDOVIC, both by ippon. The semi final seemed to be really tight, when the Uzbek launched a precise ko-soto-gake, while his opponent was coming back from a previous attack. WIthin a second, SANJAASUREN was lying on his back, the referee showing with not doubt that this was a perfect ippon, synonymous of final for FARMONOV.

The second semi final of the men’s -66kg, faced the Japanese, TAKAJO Tomofumi, and the Russian, Kama KHAN-MAGOMEDOV. Even, if the public widely encouraged KHAN-MAGOMEDOV, at the end of the combat, it was the Japanese TAKJO, who was qualified for the last fight of the day in that weight category.

Only 15 seconds were necessary to Corina CAPRIORIU (ROU) to score ippon against Zhanna STANKEVICH, with a perfect sode-tsuri-komi-goshi, which gave her the final victory of the day in the women’s -57kg category.

Without any doubt, the favorite of today’s competition was Corina CAPRIORIU, from Romania, pointing at the 6th place in the World Ranking List. In her semi final she was opposed to the Russian, Ekaterina VALKOVA, currently 168 at the WRL, who with no doubt will make a jump forward in the ranking after her results in Moscow. But that was not enough to defeat CAPRIORIU, who won by ippon (immobilization) and thus was the second Romanian fighter to enter the final today, after DUMITRU, in the women’s -48kg category.

In the second semi final of the day, the two best seeded athletes of the second half of the draw could make it through the preliminaries, to meet for a place in the final. With two yuko, Zhanna STANKEVICH from Armenia, went through and joined CAPRIORIU for the Final.

After a little more than 2 minutes in the final of the men’s -73kg, nothing was scored and only shido have been distributed, giving the lead to NISHIYAM (2 shido to 1). 1 minutes and 28 seconds before the final gong, a third shido was given to the Uzbek fighter, the Japanese taking a strong option on the final victory, option that was transformed into reality a few seconds later.

World number 6 and surprising winner of the Judo Grand Slam, Paris 2012, was again present and well present, here in Moscow for this second grand slam of the year. In his semi-final, he was opposed to the Junior World Champion of 2009 in Paris, the Japanese Yuki NISHIYAMA, who really represents the future generation of nippon fighters. After the regular time, nothing was scored, but SAINJARGAL had a shido against him. During the golden score, the two fighters neutralized themselves and when the referees age a shido to both athletes, automatically, NISHIYAMA was sent to the final, SAINJARGAL finishing third this time.

The second semi-final opposed the two Uzbek competitors, Navruz JURAKOBILOV, bronze medallist in Tashkent at the Asian Championships 2012, and Mirali SHARIPOV, finalist on the occasion of the recent Judo Grand Prix, Baku 2012. The win went to Navruz JURAKOBILOV.

The last final of the day opposed Alice SCHLESINGER (ISR) and Martyna TRAJDOS (GER). After a few seconds, the German launched a first attack, which was immediately countered by SCHLESINGER, but she couldn’t throw her opponent. Then, the rest of the fight seemed to follow a written scenario: TRAJDOS attacking uchi-mata, with a gross grip over SCHLESSINGER’s shoulders, who awaited to counter attack. Just before the last minute, based on that scenario, the Israeli fighter, countered for a last time TRAJDOS’ attack and scored ippon.

In the women’s -63kg, Alice SCHLESSINGER (ISR) confirmed her favorite position and Olympic qualification by entering the final after having easily defeated Hilde DREXLER (AUT) in the first semi-final. The second semi-final of the day opposed TSEDEVSUREN Munkhzaya (MGL), second at the recent Asian Continental Championships and Martyna TRAJDOS (GER), who won the Sofia World Cup this year. In a one way fight, the German easily took her ticket for the final.