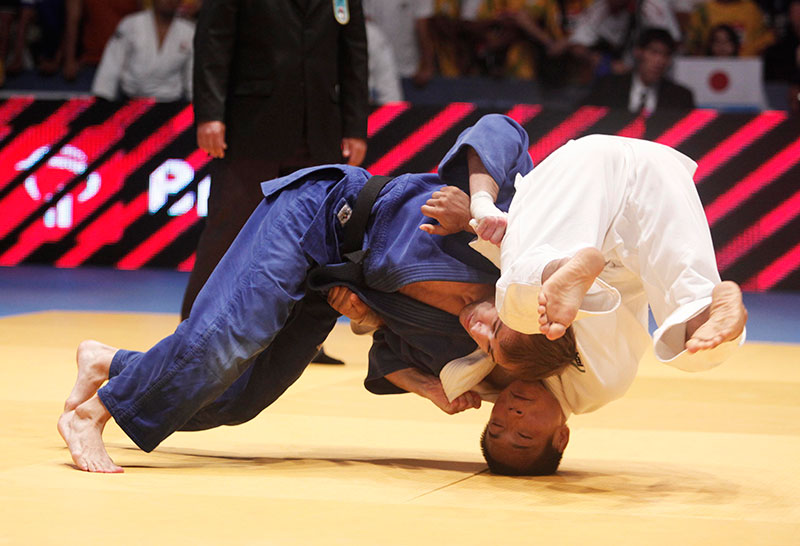 Salvador Bahia – Brazil, Oct 29, 2012: The second day of the World Judo Championship Teams, Salvador, Bahia 2012, men’s competition, was put under the sign of spectacularity and under the sign of the World Judo Day, which was organized throughout the world in more than 50 countries on the same day. All day long, the enthusiastic public of the Judo arena enjoyed flying ippons and incredible turnarounds. Present to support its national team from early morning on, the Brazilian public enjoyed and cheered all the other teams, to produce an outstanding atmosphere. The team event is definitely different from any other competition and would be a superb conclusion of the Olympic program.

The first fight of the final of the day opposed Ebinuma (JPN) and Pulyaev (RUS) in the men’s -66kg. Just before the first minute and a half, Pulyaev produced his first big effort and engaged a kataguruma (without the leg grabbing). While Ebinuma was rolling on his back, the referee announced waza-ari. But only a few seconds later, the world Champion from Japan, responded with a superb leg movement, while his opponent was in a defensive position. Ippon for Ebinuma, one point for Japan. The second fight opposed Awano (JPN) and Kaytmozov (RUS) in the men’s -73kg. The first real big opportunity that could be counted as a score happened within the last minute of the fight.

A small yuko for Awano, and a second point for Japan. The third fight of the final of the men’s competition, saw Nagashima (JPN) and Khabachirov (RUS) running after a third point for Japan and a first one for Japan. At the end of a very tactical fight, the decision was made by 2 penalties against the Japanese, and one against the Russian, enough for Khabachirov to get the victory point. The fourth match of the final opposed Nishiyama (JPN) and Magomedov (RUS). Dominated by the high gripping of the Russian and totally exhausted, Nishiyama was rapidly penalized with a first shido, followed by a second one, a fews seconds later for the same reason. Totally incapable of any kind of reaction, Nishiyama received a third penalty, just before the last minute. Magomedov waited a little bit more, to bring the second point to Russia. Once again, the scenario was perfect. When the triple world Champion and silver medalist, Mikhaylin (RUS), and Shichinohe (JPN) entered the tatami for the last fight, nobody in the stadium was capable of giving any prediction about the final results and for the first time during the day, the Russian champion would have to really show his talent. After three minutes, four penalties were already distributed (2 for Shichinohe and 2 for Mikhaylin). The Japanese looked more fresh than his famous opponent, who nevertheless remained dangerous on all his attacks. Having difficulties to breath, Mikhaylin found the necessary energy to score a yuko just on the hedge of the tatami. Totally exhausted, the Russian literally finished on his knees, but victorious, offering the ultimate tittle to Russia. After the three Olympic titles won in London, this team victory sounds like the domination of Russia over the judo planet. Bronze Medals Fights: Bronze for Brazil and Georgia

The first bronze medal fight opposed, Georgia and South Korea, the first two fighters entering the arena being, in the men’s -66kg weight category, Kardava (GEO) and Hwang (KOR). The first sweeping technique (de-achi-barai) executed by Karadava but for no score, woke up the public, which was still waiting for the second bronze medal contest between France and Brazil, as a remake of last year’s final. The Korean responded with a strong sutemi-waza, but also for no score. The first point went to Georgia, Karadava winning by two shido (passivity penalties). The second fight opposed Tatalashvili (GEO) and Seo (KOR) in the men’s -73kg. A first shido was given to Tatalashvili for false attitude and once again, the public seemed to wake up when the Korean launched a superb shoulder movement. But he could not control it until the end and did not score. 2 minutes before the end of the combat, it was the Georgian to be penalized by shido for passivity. The fight seemed to slowly reach the end of the regular time, when Seo launched a swift makikomi movement for ippon, giving a first point to his delegation. The second point for Georgia immediately came after, Korea having no fighter in the men’s -81kg. In the men’s -90kg, the objective was clear for the European Champion, Liparteliani, opposed to Kwak (KOR): to win to give a third point to his delegation and that is exactly what he did by pushing his opponent to get penalties until the disqualification. The last bout opposed Matiashvili (GEO) and Cho (KOR) for the honor, the bronze medal already standing in the Georgian corner. Cho was easily leading the fight by waza-ari, when he directly grab the leg of his opponent and gave thus gave the fourth point to Georgia.

The second bronze medal match was particularly awaited as it sounded like the final of last year’s championship in Paris, when France won the title. A perfume of revenge was flying in the air of the packed arena and the temperature dramatically raised when the two first fighters entered the tatami: Revite (BRA) and Dragin (FRA). After half of the combat, only one penalty was written on the scoreboard, when the Brazilian launched a first very powerful attack for yuko, giving the advantage to Brazil, an advantage that Revite could keep safe until the end of the fight: 1 point for Brazil. The second combat opposed Mendonca (BRA) and Allardon (FRA) in the men’s -73kg. After 50 seconds, Mendonca, received a first penalty for passivity, which pull him out of his lethargy. Actually a few seconds later, the Brazilian scored a superb yuko with a counter attack. But it was not the last word of the French delegation. With an aerial o-uchi-gari, Allardon ruined the hopes of the public for an immediate second point for Brazil. In men’s -81kg, it was the turn of Penalber (BRA) and Pietri (FRA) to enter the mat, both athletes having a very risky and spectacular judo. After three minutes of strong attacks but for no score, coming from the two fighters, the scoreboard was still desperately empty. After an incredible fight, Penalber and Pietri entered the golden score, but with a ko-uchi-barai, evaluated ippon and executed at the right place and the right moment, Pietri gave the second point to France. Silva (BRA) and Gobert (FRA) could enter the tatami with two different objectives: to give the point of the final victory to France for Gobert, and a second point to Brazil, for Silva. When 30 seconds before the end of the fight, Gobert scored yuko, he raised his arms, sure that he had won and given the point to France. But there were 6 seconds remaining on the scoreboard and Silva continued to go forward, sure that a judo fight end with the final gong. When the referee announced that the last counter attack of the Brazilian was a ippon, scored exactly when the time was over, the whole stadium totally exploded with joy. 2 : 2. The victory would be decided by the last fight between the gigantic Silva (BRA). and the compact Thorel (FRA). What an incredible scenario! And finally, in what looked like an unbalanced fight, the decision was made by a direct leg grab of the French, who then was disqualified. Brazil could celebrate this beautiful bronze medal.

In the top of the draw, Team France was awaited after its superb world title obtained in 2011. But it was in Paris, in front of the French audience of the Palais Omnisport de Paris Bercy. Therefor, just prior to the competition, the question clearly was: could Matthieu Bataille, the French heavy weight, produce once again the magnificent judo that he showed last year when the French squad jumped onto the highest step of the podium? Actually, the first round was a tricky one for the French, who passed the preliminary round with no opponent. In front of them, for a place in the semi-final was Team Cuba, who already had won against the United States of America and was in a positive mood. After the first four fights, both teams were tied, 2 points to 2, and once again, Matthieu Bataille delivered his fool power to overcome the Cuban, giving the ultimate point to France, which qualified for the semi-final. An interesting Japan – Uzbekistan launched the competition in the pool B, followed by Japan – Georgia, both matches being won by the Nippon delegation, which showed some great judo, but also some weaknesses, that must have been studied by their future opponents.

Thus the first semi-final opposed France and Japan, the World Champion and Olympic bronze medallist, Ebinuma, offering the first point to his delegation with the waza-ari scored agains the French, in the men’s -66 weight category. During the second combat, Urani (FRA) seemed to control the fight, when he was thrown by the Japanese for ippon and 2 points for Japan. In the third fight, Pietri, for a while gave hope to the French delegation that it was still possible to win, but, finally, Japan scored the third point, synonymous of final and scored again points 4 and 5 to qualify for the final.

In the second half of the draw, Team Brazil, who won the silver medal last year in Paris, really believed that, in front of its public, 2012 would be the good moment to win the ultimate team trophy. But it was not the opinion of the Russian delegation, which, helped by two big mistakes of the Brazilian fighters (2 consecutive Hansoku-make for direct leg grabbing), could go through the preliminaries and enter the semi-finals, where they met the outsider, South Korea. In fact, Korea went through the preliminaries quite easily by successively defeating Mongolia and Algeria. So, the second semi-final of the day opposed Russia and Korea and after three fights, Russia was already qualified for the big final, with three victories, confirming the good condition of the Russian athletes, after the fantastic results obtained in London, last August. The second part of the semi-final was identical to the first one. Russia won the last two fights for an indisputable 5-0 and got qualified for the final.