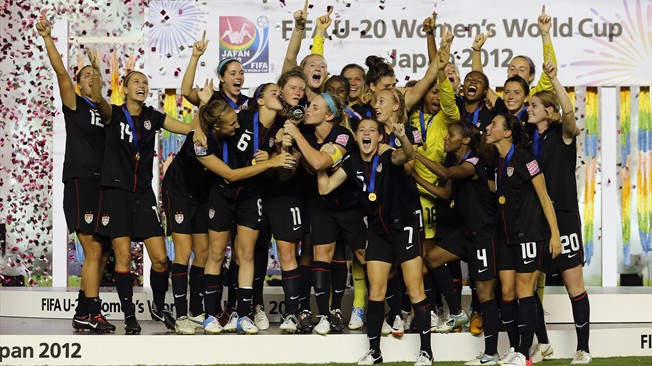 Tokyo – Japan, Sept 8, 2012: World Cup 2012, THE DAY REPLAYED – USA upset the odds to edge Germany in a battle of the FIFA U-20 Women’s World Cup elite. Germany had comprehensibly overcome their rivals 3-0 in a Group D encounter just a fortnight ago, and went into the contest without having conceded a goal during all six matches at Japan 2012. However, a lone strike from Kealia Ohai a minute before half-time proved to be the decisive moment of the contest as USA claimed their third crown at the expense of the 2010 champions.

Earlier in the day Japan proved a popular winner for the majority of the large and colourful Tokyo crowd. Goals in either half from Yoko Tanaka and Asuka Nishikawa had the Young Nadeshiko on their way in what was a typically high-spirited display. However, 2010 finalists Nigeria have shown their resilience more than once during the tournament, and a Desire Oparanozie strike caused nerves to jangle for many in the National Stadium. Third place is Japan’s best performance, having never previously appeared in the semi-finals of the tournament.

Goal of the day

First-half substitute Hanae Shibata classically sped past several defenders just outside the penalty area, before teeing up Nishikawa who displayed fast feet and a cool head to clip the ball into the net past the onrushing goalkeeper.

Tokyo Tower, the Japan capital’s own version of Paris’ Eiffel Tower, was lit up to mark the first FIFA women’s final in Japan. For three hours the tower shone brightly in the tournament’s colours, blue and pink. One of the biggest cheers of the night came as an image of the 64-year old structure, was displayed on the giant screen.

A tale of two champions

Any doubt about USA and Germany’s claim to being the best two teams in the ten-year history of the FIFA U-20 Women’s World Cup has surely been laid to rest at Japan 2012. The pair have now shared five of the six tournament titles to date, and are also the two most successful teams in terms of matches won and goals scored.

The closing ceremony was suitably colourful and youth-orientated with pop starlets Nogizaka 46 belting out the up-tempo Official Song of the tournament. There was also a performance by a young female band formed especially for this day, featuring both Western and Japanese instruments. The symbol of the tournament, origami cranes, bearing people’s hopes and dreams on their wings, handcrafted in the five venues – Hiroshima, Kobe, Miyagi, Saitama, and Tokyo – as well as in many other parts of Japan, were carried onto the pitch to the music.

Japan coach Norio Sasaki may have a post-coaching career awaiting him. The Nadeshiko coach was presented to the crowd at half-time in the final, along with several of the FIFA Women’s World Cup™-winning stars, such as the iconic Homare Sawa and captain Aya Miyama. However, it was Sasaki that stole the show drawing considerable laughter with some of his comments to an enthralled audience.

610 – The number of minutes since had Germany conceded a goal until Ohai breached the rearguard of the 2010 champions. Ohai’s strike on 44 minutes was not only the lone goal Germany conceded at the entire tournament, but also the first since Ji Soyun found the back of the net for Korea Republic against the host nation in the semi-finals at Germany 2010.

“This victory is the reflection of many people’s effort. We faced some adversity in the group phase, and the players learnt from that. Our character showed up tonight. We faced a lot of difficult games, and it showed the competitiveness of the women’s football today. But my players are good students, and they learn from each opponent. We learned and we apply the lessons of the previous games.” USA coach Steve Swanson. —- FIFA/Image © Getty Images