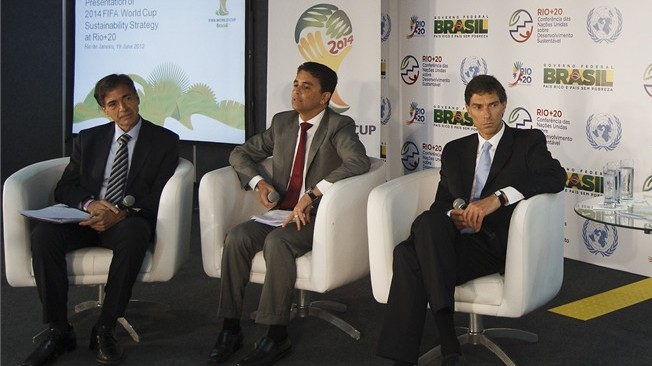 June 19, 2012: Sustainability strategy, FIFA and the Local Organising Committee (LOC) teamed up with the Brazilian government at Rio+20, the United Nations Conference on Sustainable Development, today (19 June 2012) to present their strategy to stage the 2014 FIFA World Cup™ in a sustainable way.

As one of the largest sports events in the world, the FIFA World Cup™ has a considerable impact on society and the environment. The sustainability strategy developed by FIFA and the LOC aims not only to mitigate the negative impact but also to maximise the positive effects of hosting the FIFA World Cup™. Green stadiums, waste management, community support, reducing and offsetting carbon emissions, renewable energy, climate change and capacity development are just some of the key issues that will be addressed over the next two years. A total of approximately USD 20 million will be invested by FIFA in the implementation of the strategy. Further support for the sustainability effort will be provided by FIFA’s Commercial Affiliates and other involved stakeholders.

The strategy builds on the experience gained from environmental and social development programmes at FIFA tournaments since 2005, on international standards such as ISO 26000 and the Global Reporting Initiative (GRI) and on the development policies of the government of Brazil. The 2014 FIFA World Cup Brazil™ will be the first FIFA World Cup to have a comprehensive sustainability strategy. Please visit www.FIFA.com/csr2014 to read the complete document.

“The ultimate goal is to stage an event that uses resources wisely, striking a balance between economic aspects, social development and environmental protection. We have joined Rio+20 because we want to contribute and to ensure that future generations have the same opportunities to meet their needs as this generation. We also want to ensure that the 2014 FIFA World Cup will be remembered not only as a fantastic football tournament but for its lasting social and environmental legacy. This requires participation from all parties involved, from the football fan to the stadium constructors. All are essential players in this sustainability line-up,” explained Federico Addiechi, FIFA’s Head of Corporate Social Responsibility. “And as the host of the 2014 FIFA World Cup and a global leader in sustainable development, Brazil and its government have been very important for FIFA and the LOC in shaping this sustainability strategy.”

“Football is arguably the Brazilians’ greatest passion, and football and the FIFA World Cup can certainly be strong catalysts for changing attitudes in favour of living more sustainable lives and adapting our daily routines. If we start with small acts in our own homes, this could plant the seeds of a new reality. From large-scale sustainable stadium projects to the dreams of poor children who want to see their football heroes perform on the pitch, this FIFA World Cup is already making a difference in Brazil. And it is up to all of us to make sure that we expand its legacy,” said Bebeto, a member of the LOC’s board of administration.

“Brazil is now playing a globally prominent role in environmental affairs, and this is because it has managed in the last few years to combine economic growth with social inclusion and a commitment to the environment,” said Luis Fernandes, Executive Secretary of the Brazilian Ministry of Sport. “There is great diversity to our country, which has an energy grid supported by renewable energies, solid legislation and significant advances such as the meaningful reduction in the deforestation in the Amazon. It was in this context that the Brazilian government decided to make sustainability a feature of the organisation of the FIFA World Cup. With regard to the stadiums, for example, access to the Brazilian Development Bank’s (BNDES) line of credit is conditional on a sustainable construction certification standard. The World Cup is an opportunity for Brazil to showcase such progress and reveal to the world its natural, social, cultural, racial, religious and culinary diversity.”