London, July 5, 2017: Ahead of the start of the new football season, Laureus FC is pleased to announce Japanese football star Shinji Kagawa as a new Ambassador for Laureus Sport for Good (Shinji Kagawa Laureus Ambassador). 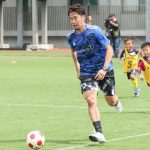 Shinji joins an illustrious list of football stars who all share a belief in the power sport can have to influence change among youth.

The midfield maestro who currently plays for German team Borussia Dortmund is one of Japan’s most prominent football stars.

Starting his professional career at J-League team Cerezo Osaka in 2006, Kagawa became the first Japanese player to sign a professional contract before graduating from high school.

In 2010, Kagawa joined Dortmund where he scored 21 goals in two seasons at the club.

In 2014, Kagawa returned to Borussia Dortmund on a four-year contract.

In the Laureus Family, Shinji Kagawa joins a group of over 190 Laureus Ambassadors from the world of sport.

Laureus Ambassadors all share a belief in the transformational power of sport and offer their time to support and inspire young people around the world.

Laureus was founded by its Patrons Richemont and Daimler and is supported by its Global Partners Mercedes-Benz and IWC Schaffhausen.

Laureus Sport for Good uses the power of sport to end violence, discrimination and disadvantage, proving that sport can change the world.

Laureus Ambassador Shinji Kagawa: “I’m honoured to join the Laureus Family. Football has given me so much in life and I am looking forward to giving something back to youth through sports.

Today I join the Laureus Sport for Good team, and in the future I’ll focus my efforts on using the power of sport to help young people overcome their own challenges.” —- LAUREUS