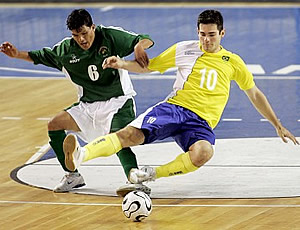 By Mohammad Ahmed, Our Special Correspondence, Karachi – Pakistan, Feb 14, 2013: We all here as everybody in us know very well that Department of Culture Sports & Recreation Karachi Metropolitan Corporation KMC has been carried out many sports activity in Karachi in last couple of years.

Furthermore, KMC organized Summer Camps in different parts of city and gave the Public Reception in the honor of World Snooker Champion, Mohammad Asif in order to promote the sports activity. Keep in mind, we shall organizing KMC Cup Day & Night Futsal Tournament 2013, so people can enjoy and take advantage of this healthy activity.

This sport is also at large in Europe and Championship is also organized regularly. It is now also taking root in Pakistan fastly.

Keeping the popularity in mind of this sport in Pakistan, the Department of Culture Sports & Recreation KMC takes the responsibility to promote the game. It is noted that it is a 1st Tournament which will be organized at Government level by the coordination & support of whole Five District Nominated Leaders.

Futsal Tournament is played from 20th to 27th February 2013 at KMC Sports Complex Kashmir Road. Matches are Day & Night and based on Knockout. 32 teams are participating in tournament.

Every match consists of 20, 20 minutes 2 half. 5, 5 minutes are given if match will ties. After that, result should be carried out on Penalty Kicks. Chief Guest of the Opening Ceremony Mr. Matanat Ali Khan, Chief Officer, KMC will inaugurate the tournament on Wednesday 20th February 2013 at 5:00p.m. KMC, Sports Complex, Kashmir Road.

Every Player of the team will offered a shirt by KMC Beside that, the Winning Team, Runners-Up Team & 3rd Position Team will get the Beautiful Trophy. Noted that, Final of the Tournament will played on 27thFebuary 2013 at KMC Sports Complex, Kashmir Road.

The Chief Guest of the Closing Ceremony, Mohammad Hussain Syed, Administrator, KMC will distribute the prizes.

In last, I am extremely thankful of Press Reporter & Nominated Members of the District Futsal Association for coming here and also hoped that you will support us for the succession of tournament.