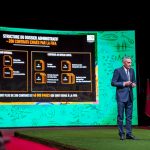 Four already planned stadia that fulfil FIFA World Cup 2026 requirements – including the 93,000 capacity National Stadium in Casablanca that will be home to the national team and host the opening match and final; and stadia in Oujda and Tetouan

The Morocco 2026 stadia plan has been developed based on the key principles of using existing or planned stadia wherever possible, creating a showcase for the best of football through state-of-art infrastructure, aligning investment with existing development plans and meeting community needs to ensure a strong legacy.

“Today is a key moment for Morocco’s bid and demonstrates the significant work that has been ongoing for many months on developing a stunning hosting plan for the FIFA World Cup 2026.

Morocco is committed to offering players and fans an authentic experience, and our 12 proposed host cities capture not simply the magic, mountains, pristine beaches and centuries old culture of Morocco, but also our modernity, rapidly expanding infrastructure and unique vision to host a tournament of celebratory passion that presents the best of football.

The FIFA World Cup 2026 is a national priority for our government and that is why it has guaranteed the required investment in our exciting and innovative stadium plans.

“Our beautiful and welcoming nation offers players and fans something very special with just one time-zone, one currency and all host cities are within a 550km radius from Casablanca, meaning limited travel and simple logistics.

Our hotel capacity has more than doubled since 2003 – we now have 110,000 hotel rooms and we will increase our bed capacity by 70% by 2026. All host cities are also all located within an hour’s drive of an airport, so players and fans need only focus on the one thing that matters most – football.”

Legacy is at the heart of Morocco 2026’s stadium plans and vision with up to five stadia having the ability to be downscaled after the tournament to meet the specific needs of their local communities.

“Our Legacy Modular Stadiums sit at the heart of Morocco’s bid and are a powerful example of our innovation and commitment to legacy. They will be at the cutting edge of modernity, 100% environmentally responsible and conceived with a sustainable philosophy to reduce construction costs and complexity.

“As soon as the final whistle blows on the 2026 tournament, the stadiums will be adapted to meet the specific needs of their cities and to make them more accessible for local communities, with the aim of maximising participation in football and other sports and cultural activities.

Local clubs will become anchor tenants with responsibility for adapting the stadia to their requirements, particularly in terms of capacity.”

“I know from personal experience that every nation that plays in Morocco is greeted by truly passionate fans who know football inside out.

This has bred an amazing passion and knowledge for the game and I’m convinced Morocco will deliver something incredibly special for FIFA in 2026.”

As well as unveiling Morocco 2026’s proposed Host Cities and stadia, the bid web site, strap line ‘Together For One Goal’ and the first campaign film were revealed, which can all be viewed on www.morocco26.com