Jordan, Oct 1, 2015: A thousand-mile journey begins with a single step. For Jordan, this step was taken on the evening of Wednesday 30 September 2015 and represented a milestone on the road to the biggest event in the history of Jordanian sport. On this occasion, it was not players who were the centre of attention but an event, one that marked the beginning of the one-year countdown to the start of FIFA U-17 Women’s World Cup Jordan 2016. 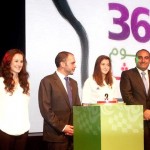 In a festive ceremony organized under the patronage of Her Majesty Queen Rania Al Abdullah, the Local Organizing Committee (LOC) launched a clock that represented the one-year countdown to the kick-off of the elite showpiece, which will be held between 30 September and 21 October 2016. Leading officials attended the event, including His Highness Prince Ali Bin Al Hussein, the President of the Jordan Football Association (JFA), Moya Dodd, member of the FIFA Executive Committee, and a host of political, economic and sporting figures.

The ceremony started with a pre-recorded message from Her Majesty Queen Rania, in which she highlighted the importance of the tournament for Jordan. “This is a historic event for Jordan. It is a national achievement,” said Her Majesty. “All Jordanians will be proud to welcome the best teams in the world, who will be competing to win the World Cup here on our soil. We are all responsible for being fully prepared for the event and showing the world the hospitality of our nation. Let us all work together to make this unique event a success.”

In a speech given on behalf of the LOC, CEO Samar Nassar extended the Jordanian football community’s gratitude to the endless support of their Majesties, King Abdullah and Queen Rania Al Abdullah, in helping host a tournament which will generate great benefits for the country.

“Women’s football has received immense support in Jordan, since the creation of Jordan’s women’s national team in 2005. Throughout the past ten years, everyone has been working hard to advance women football,” said Nassar. “Hosting the U-17 Women’s World Cup is the result of hard work, and certainly represents a giant step on the road of development.

“This showpiece will be a turning point in the history of women’s football in Jordan and will attract more attention to the sport,” she continued. “The positive impact of this global event will not be limited to young girls, but will extend to the whole football scene in the country, including developing stadiums that will make up a part of the tournament’s legacy.”

Moya Dodd added: “This is a unique opportunity to advance women’s football in Jordan and the wider region. This tournament will leave a legacy that will inspire a large number of young girls to play football. It will also play an important role in enhancing understanding between different cultures.”
The ceremony saw the announcement of the first two local ambassadors for the tournament: Mohammed Al Wakeel, a television presenter, and Yasmeen Khair, star of Jordan’s national team and a former gymnastics champion.

Towards the end of the ceremony, His Highness Prince Ali Bin Al Hussein, along with heads of municipalities of the three cities hosting the tournament, the two local ambassadors, and the captain of the Jordan’s U-17 women team, all took to the stage to launch the countdown clock amid rapturous applause from the crowd.

In addition, the LOC announced the launch of a bus that will bear the tournament’s motto and travel across the three host cities, Amman, Al-Zarqa and Irbid, to promote the tournament and capture the attention of the local communities – encouraging interaction with the showpiece event. —- FIFA